More and more parents throughout the country are protesting the ridiculousness that is Common Core. And a new video that is sweeping the nation shows why — using Common Core math, it apparently takes a full 56 seconds to figure out how to add 9+6. 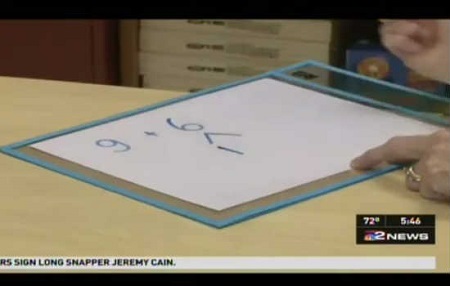 Remember the days when students in school memorized basic math facts. We learned our multiplication facts and basic addition facts. These served as building blocks as Math became more complicated and you had to solve smaller problems within larger equations. Now, thanks to Common Core, that way of solving a problem is out the window. What once took seconds, because you knew it as a fact, now takes nearly one full minute to solve.

WGRZ, the NBC affiliate in Buffalo, NY, has a series of video segments meant to help parents as they try to understand and maneuver through the Common Core methodology. It takes the teacher 56 seconds to arrive at the fact that 9 + 6 = 15. Are we supposed to view this as progress in education?

That convoluted nonsense is supposed to be an improvement? The thinking seems to be that you can make something easier by making it harder, which makes no sense whatsoever — which, come to think of it, is probably exactly why liberals love it.