Thanks to the actions of today’s so-called “feminists”, it’s now guilty until proven innocent — for men, anyway. And after one male Columbia University student was branded a rapist by a female student, he decided to file a lawsuit. 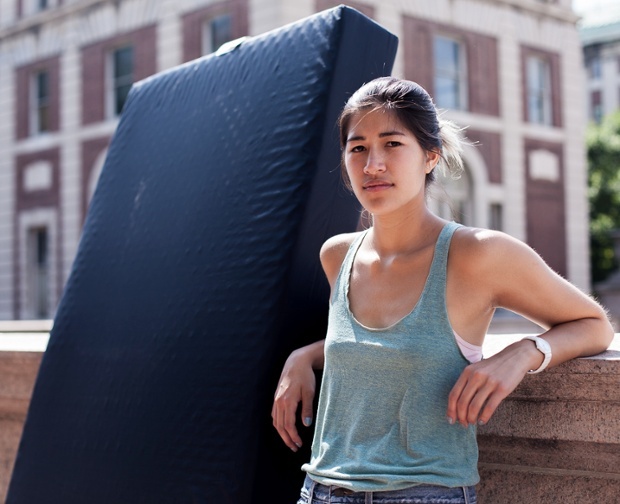 Authorities rejected Emma Sulkowicz’s case that Paul Nungesser, a German citizen, was a ‘serial rapist’ who assaulted her after class.

Nonetheless, the case gathered international attention as Sulkowicz, a senior majoring in visual arts, publicly paraded her mattress in protest, calling for his indictment.

And according to Nungesser’s lawsuit citing ‘gender-based harassment and defamation’, Columbia presented the allegations as fact on a university-owned website.

… In his lawsuit, Nungesser said a Columbia-owned website had presented as fact that he sexually assaulted Sulkowicz, a senior majoring in visual arts.

It said that the school allowed Sulkowicz to carry a mattress into classes, the library and campus-provided transportation as part of her senior thesis, that Kessler approved the ‘Mattress Project’ for her course credit and that Sulkowicz’s pledge to carry her mattress to graduation may prevent Nungesser and his parents, who’d like to fly from Germany, from participating in graduation ceremonies.

‘Day-to-day life is unbearably stressful, as Emma and her mattress parade around campus each and every day,’ the suit said.

As a result of publicity that resulted in media reports in 35 countries, the lawsuit said, Nungesser ‘has been subjected to severe, pervasive … and threatening behavior by other Columbia students, believing that Paul is a `serial rapist,’ whenever Paul has appeared at university activities.’

The complaint also said he wants to stay in the United States, where he has been dating a girlfriend for over a year, and is seeking consulting work in New York, though job prospects have been ‘severely jeopardized’ by the school’s support of Sulkowicz.

In an email responding to a request for comment, Sulkowicz wrote: ‘I think it’s ridiculous that Paul would sue not only the school but one of my past professors for allowing me to make an art piece.

‘It’s ridiculous that he would read it as a `bullying strategy,’ especially given his continued public attempts to smear my reputation, when really it’s just an artistic expression of the personal trauma I’ve experienced at Columbia. If artists are not allowed to make art that reflect on our experiences, then how are we to heal?’

Once upon a time, people actually had the right to a fair trial and were considered innocent until proven guilty — but thanks to the actions of rabid feminists and man-haters everywhere, any time a man is accused of rape, he is automatically guilty and deserves to have his life ruined. Maybe one of these days we can get back to that quaint notion of requiring evidence and conviction from a judge and jury instead of just shrieking harpies in the media.