A New York City public school has achieved another milestone in our decline by rejecting the use of books:

In a scene out of “Fahrenheit 451,” administrators at Life Sciences Secondary School have ordered all textbooks rounded up and removed — calling them “antiquated,” sources say.

Principal Kim Swanson and Assistant Principal Derek Premo, who launched the ban, “really frown upon the use of books,” an insider told The Post.

“They just took books that teachers have been using and not replaced anything.”

While the administrators tout “modern technology” over books, they have failed to provide the necessary equipment, the staffer said.

“Most classrooms have only two computers, and not all are hooked up to the Internet.”

Expensive books, purchased by taxpayers, have been piled up like garbage, slated for disposal. At least one teacher hid books to prevent them from being destroyed.

Anthony Galindo, a 14-year-old student, doesn’t know what to make of it:

“It’s really strange. Last year we didn’t have enough textbooks so we had to share. Now we don’t have any at all,” he said, adding: “I liked being able to take them home to study.”

As for academic performance at Life Sciences Secondary School,

Last year, 5 percent of its 6th- to 8th-graders passed state math exams and 9 percent passed English — far below the city average. At the high-school level, 82 percent graduated, but only 26 percent were deemed college-ready.

Throwing out the books is unlikely to move these numbers upward.

The school is located on the hoity-toity Upper East Side. But of course, no one with money would send their kids to public school in NYC.

Yet again we see that education is far too important to be left in the hands of the government. 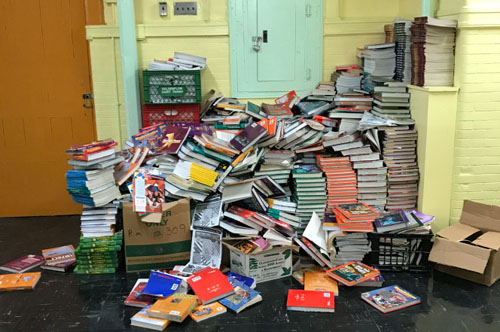 No longer regarded as useful by educrats.

On a tip from Sean C. Cross-posted at Moonbattery.