Over 300,000 Rally in Rome Against Gay Marriage & teaching gender theories in schools

Rome is the cradle of Christianity[1] and Catholicism, so I would expect nothing less there. This worldwide communist move of pushing a gay mandate is just monstrous. People from all walks of life, all races, all religions marched by the hundreds of thousands in Rome to protest legislation that would institute gay marriage and the teaching of gender theories in schools. Christians and the majority of others all find this reprehensible and offensive. Especially when it is forced on children. The family unit is sancrosanct to humans. Elitists are seeking and desiring an orchestrated outcome to destroy families and crush morality, which will be fought tooth and nail by Christians. This is only the beginning. 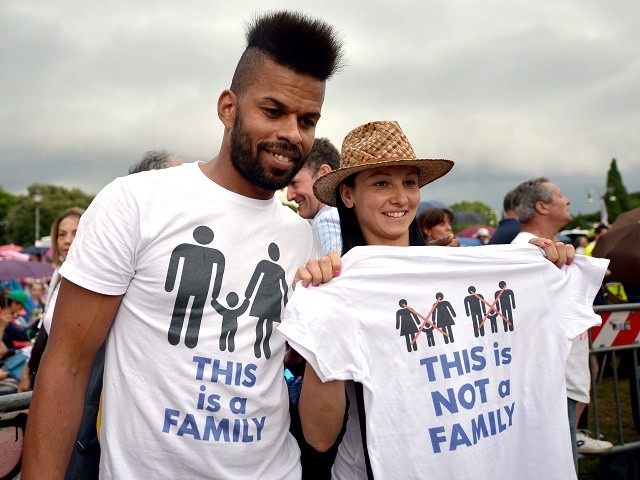 Hundreds of thousands of people travelled from all over Italy and Europe yesterday to protest against the proposed legalisation of gay marriage, and the teaching of ‘gender theories’ in schools.

Gathering in the San Giovanni Square in Rome, with estimates of participants running from 300,000 to a million people, the protest put the ‘anti-Austerity’ protests held in London on the same day to shame, for sheer volume of people and absence of criminal behaviour.

Attendees held aloft banners reading “The family will save the world” and “Let’s defend our children”, as Italian Prime Minister Matteo Renzi tries to push a civil union bill through parliament.

“In my children’s schools they are talking about families made up of two fathers or two mothers, without asking parents’ permission,” said 41-year old doctor Giuseppe Ripa, adding: “It’s dangerous and wrong.”

Fellow protester Piero Uroda, a 78-year-old pharmacist, said it was “not honest to say these things to the very young, it’s not like they are students who can debate these ideas. I don’t want gay marriage or gay adoption, the natural family is like ours”.

The call for Italy to keep pace with its western European neighbours on the issue has grown stronger since Ireland voted overwhelmingly in favour of gay marriage last month.

But rights activists warn it will be no mean feat for the leader of the centre-left Democratic Party to find allies across the political spectrum, blaming an excessive influence of the Catholic clergy on the political class.

Rejecting the assertion, Massimo Gandolfini, spokesman for the “Defend our children!” committee said: “We are asking for families based on marriage be respected, and stressing the central role parents play. We forcefully reject the attempt to sneak into the curriculum projects which aim to destroy children’s sexual identities”.

Matteo Salvini, rising star on the far right and head of ‘Italy’s UKIP’ Northern League party, sent a Facebook “hug for all the mummies and daddies protesting peacefully in Rome to defend their children’s future.”

Vincenzo Brana, head of the long-standing Arcigay gay rights association in Bologna, was quick to score political points on the occasion, pointing out that “today is World Refugee Day”, remarking their problems “are an urgent issue which concerns us all. Those who take to the streets to talk of other things show they are living on another planet, and I would recommend leaving them on that planet alone”.

Italy’s left-wing government is hoping to enact legislation to legalise same-sex unions by the end of July.

The US is being forced down this path and Christians are already saying they will not comply. Ireland allowed their government to push and institute the gay agenda. Now they have set their sights on Italy. With the current Pope in power, I guess they felt it would be a cakewalk, but the Pope doesn’t represent all Christians and Catholics as a whole are against the gay agenda. The Italians are right – our children’s future and the viability of the family unit are at stake here. Gay rights are being used to subvert religious rights… it is communist and it is evil. We will not submit to this globalist agenda.