Parents are angry after a school tells 13-year-olds they can have sex, choose gender

Planned Parenthood strikes again with public school sanctioned perversion and sheer evil taught via gingerbread posters. No need to tell the parents – they think they are too dumb to get it. Get to the little ones and explain to them they should be having wonton sex and choosing which gender is ‘right’ for them. Screw their parents (actually, that’s probably on the agenda too, just sayin’). And abortions for all after you get knocked up! It’s the Planned Parenthood progressive two-step to indoctrinate children into immorality and an anything-goes form of promiscuity. This form of education is an exact reflection of the political agenda of Planned Parenthood.[1] 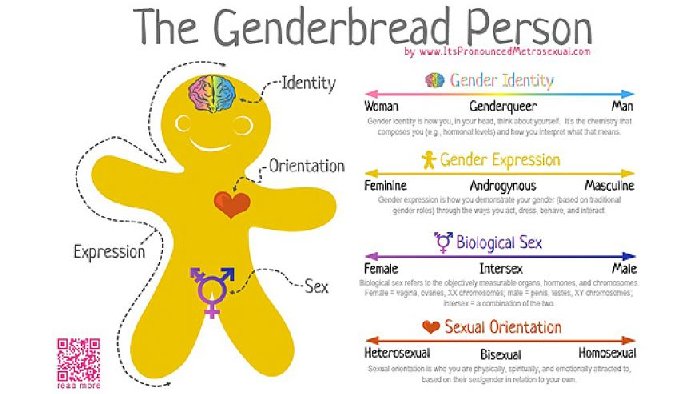 Students at Acalanes High School in Northern California were given this gender identity chart in a sex ed class conducted by the local Planned Parenthood chapter.

It was the parents of ninth-graders at Acalanes that started raising questions after their children told them one instructor threw a model of female reproductive organs at one student and that many felt the sessions were pressuring them to have sex.

“Some of the kids were distracted because it was divergent from what they were taught at home,” Dacus said.

Acalanes Union School District officials told the institute the class was not taught by teachers but rather the staff from a local Planned Parenthood in nearby Walnut Creek.

Included in the materials provided to students were documents and worksheets that included a checklist entitled, “Sex Check! Are You Ready For Sex?” in which the 13 and 14-year-old students are asked questions such as if they have water–based lubricants and condoms and if they could handle a possible infection or pregnancy. Another worksheet reads like a how-to on obtaining consent from a possible sexual partner and offers possible statements like “Do you want to go back to my place?” and “Is it OK if I take my pants off?”

They were also taught about gender identity with the “Genderbread Person,” a play on the name of the holiday cookie, to teach them on how to identify themselves as either, “agender,” “bigender,” and “two spirit” to name a few.

“Our daughter took this course two years ago, after being provided the opportunity to opt out of the class,” John Lyons, whose two children attend AHS, told FoxNews.com. “The opt-out form provided a handful of bullet points about what the course would cover. After completing the course, it was apparent that some of what was ‘taught’ went beyond what was represented on the opt-out form. This is disappointing to us, because we are actually strong supporters of teen sex education in a peer environment to complement our home-based discussions.”

Lyons added that he and his wife were dismayed by how the students were instructed. He said valuable and factual information was delivered in a manner that seemed to promote Planned Parenthood’s agenda regarding ‘social justice’ through sex education of teens.”

The more children are taught perversion, the more money Planned Parenthood gets. This is the imparting of ‘social justice’ through sex education of teens. It is the same agenda that Barack and Michelle Obama push as do all of their cronies. It is meant to make children have disdain for their parents, embrace immorality and learn to hate religion. It is evil on a cracker and is being force fed to our most cherished resource. It also violates the student’s rights and state law. Parents… get your children out of the public school system, whatever it takes.