Professor Proclaims All Republicans Are “Racist Scum,” Wants Statues of Washington and Jefferson Torn Down

When liberals preen themselves on their tolerance, they may be referring to what founding father of political correctness Herbert Marcuse of the Frankfort School called repressive tolerance:

Surely he doesn’t mean all Republicans? Yes he does:

“All republicans? Yes,” he confirmed in the comments section. “Your complacency made this happen. Pick a side: denounce your affiliation, or admit you’re a racist.”

What exactly is so racist about all Republicans? Knijnenburg elaborates:

“The republican ideology of ‘everyone is equal and nobody deserves a handout’ is naive at best, covertly racist at worst.”

Thinking of people as equal is racist; that is, not being a racist is racist.

As for what needs to be done about all this racism,

Knijnenburg explicitly endorses violence in one post, stating, “I admire anyone who stands up against white supremacy. Violent or non-violent. This needs to stop, by any means necessary. #PunchNazis” 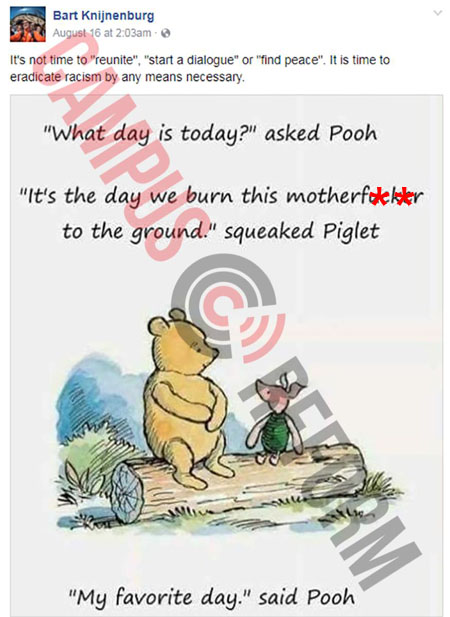 In this context, “racism” can be defined as “any resistance to the ultra-left agenda.”

Knijnenburg endorses the extralegal removal of Confederate statues, and makes clear that George Washington and Thomas Jefferson memorials are next on the hit list.

Leftists in academia are like cockroaches. For each one that scuttles out into view, you know there are a thousand more just like it, breeding in the walls.