School Worksheet Tells Kids That the GOP Thinks Helping the Poor is a “Waste of Money”, Parent Claims

Liberal bias in education is alive and well, and one parent just discovered that the hard way. Her son brought home a worksheet where the teacher wrote that conservative Republicans believed that helping the poor is a “waste of money”. 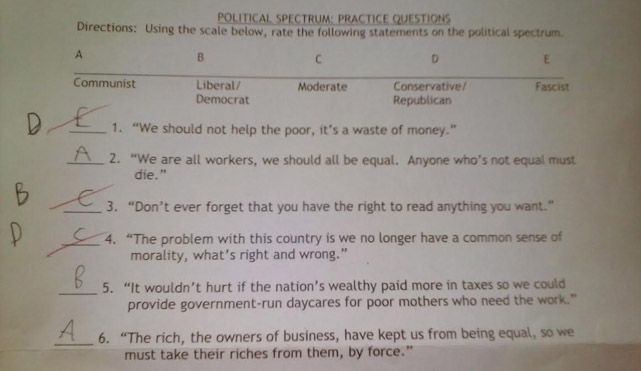 A Wisconsin mother claims her 16-year-old son’s classroom assignment last week described Republicans as opposed to helping the poor because “it’s a waste of money.”

The woman said her son, a junior at Nathan Hale High School in West Allis, Wisc., was asked, along with other students, to complete an assignment about different views on the political spectrum while in a U.S. government and politics class on Thursday.

The assignment listed a series of quotes and required students to identify which party affiliation best represented each statement.

The first quote read, “We should not help the poor, it’s a waste of money.”

The mother, who asked only to be identified as “Heather” to protect her son’s privacy, said he chose option “E” for “Fascist” because he “didn’t know what else could be the answer.”

When the assignment was returned, the answer was marked as incorrect and the teacher wrote in option “D” for “Conservative/Republican” instead, his mother told FoxNews.com.

It’s funny how liberals think that if someone doesn’t believe in government compulsion, then they are unwilling to help anyone at all. It’s especially funny, considering that conservatives give much more of their time and money to charity than liberals do — so maybe this teacher, and the school district, should get their facts straight before they try indoctrinating students with liberal BS that couldn’t be further from the truth.