On the surface, it seems terrifying and wrong: a teacher takes off his belt and begins whipping middle school students. But the reason why he did it might have you thinking differently. 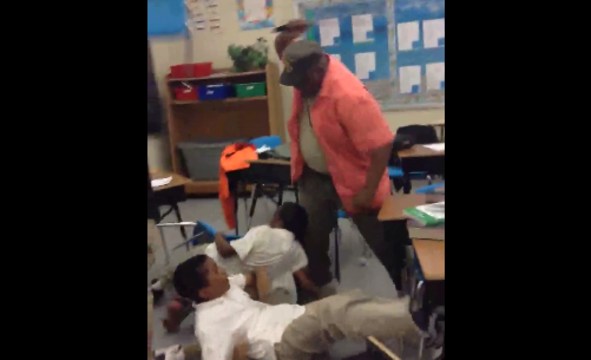 A group of four boys fighting in their classroom were brutally halted when their teacher took off his belt and started hitting them with it.

In shocking cell phone video posted to Live leak on Friday, likely recorded in an American classroom, children can be heard shrieking as the unidentified teacher whips them about three times with his belt.

Chairs and tables are overturned, what appear to be middle-school aged boys and girls scream in fear and let out nervous laughter as they scatter and run to either side of the room.

… It is unknown where the clip was recorded but since the children in the video are wearing uniforms the incident probably took place at a private, military, or religious school.

It turns out that this happened at Gwynn Park Middle School in Prince George County, Maryland, and while the school has suspended the teacher, reaction on social media has trended in favor of the teacher. Unsurprisingly, the parents of the little angels in the classroom — you know, the ones who broke out into a fight in the middle of class that had to be broken up by the teacher — are upset that their special snowflakes were actually disciplined, saying that the teacher should have found “another way” to break up the fight between multiple students. Maybe if these easily-rattled parents exercised some discipline at home, the teacher wouldn’t have to fill in the gaps for them because they were behaving badly at school.