The Obama administration isn’t big on choice in education. So the state that made the grave error of opting out of Common Core is now facing the wrath of the federal government, which is threatening to withdraw federal funding. 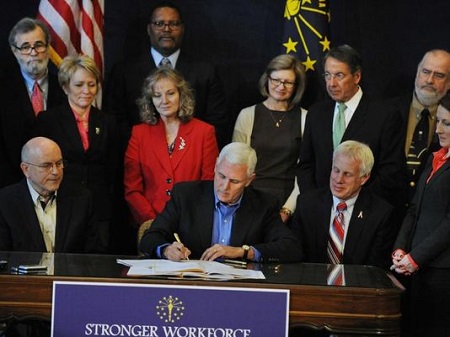 The Obama administration has issued a clear warning to the first state to drop the Common Core State Standards.

The U. S. Department of Education said in a letter to Indiana Superintendent of Public Instruction Glenda Ritz that the state must prove its own standards are just as challenging, or else risk of losing its waiver from the Bush-era No Child Left Behind law and have its federal funding in jeopardy.

“Because the [Indiana Department of Education] will no longer implement those standards, IDOE must amend its [Elementary and Secondary Education Act] flexibility request and provide evidence that its new standards are certified by a state network of [Institutions of Higher Education] that students who meet the standards will not need remedial coursework at the postsecondary level,” the letter says.

Indiana is the first of the 44 states that adopted Common Core to repeal the controversial K-12 math and English standards.

It’s appallingly obvious that Common Core, and the insistence that it will be “state led”, is a huge joke. It doesn’t matter that Indiana exceeded education standards before Common Core was implemented — our Dear Leader has spoken, and his administration will stop at nothing, not even blackmail and extortion, to force everyone to bend to his will.