My IQ dropped 10 points just watching these morons. I thought you had to be at least semi-intelligent to get into George Washington University – who knew you could be a driveling idiot and still attend? Asked by Campus Reform if they would sign a petition that would deport one American to let one illegal immigrant in, more than 2/3rds of those approached signed it. Some citing social justice… others using Valley Girl logic that would cause anyone’s eyes to weep brain matter. These students robotically repeat the talking points of the Marxist Left as if they are brain-dead zombies. Uh, news flash… you Mensa candidates may be the ones deported if your wish came true. I hear Cuba is taking Americans – go for it.[1] 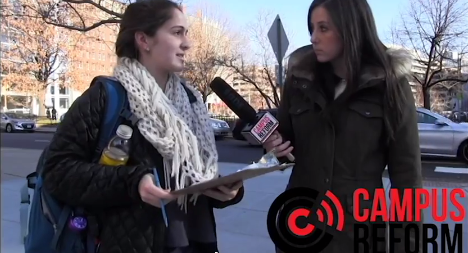 Students at George Washington University (GWU) willingly signed a petition supporting the deportation of one American citizen in exchange for one illegal immigrant.

“Please sign our petition for President Obama to deport one American citizen, in exchange for one undocumented immigrant,” read the petition. “Everyone must be allowed a shot at the ‘American Dream.’ Americans should not be greedy. Let us right the wrongs of our past and make another’s dreams come true.”

“It makes sense,” one student told Campus Reform. “Like, I’ve noticed that there is a lot of like hatred against undocumented immigrants and it’s not necessarily their fault.”

“Everybody deserves a shot and we shouldn’t rule anybody out,” said another.

After some consideration, a female student decided signing the petition was best in the name of social justice.

“If somebody were to sign up for this program and they were going to go through all the effort to become this one undocumented immigrant than I think that’s enough will power and enough desire, they should be able to come in,” she said.

Campus Reform was at GWU for around an hour and was able to gather signatures from more than two-thirds of the students they talked to.

Obama’s executive action was unconstitutional and at least one federal court has ruled it so. But that won’t stop a lawless dictator. We are a nation of immigrants, but they should follow the law and come here the right way. Instead, we allow the Progressives to erase our borders and welcome an invasion in order to get cheap, slave labor for the Chamber of Commerce and change the voting demographic to midnight blue forever. Thus, ensuring the end of a free Republic and institutionalized Marxism for all. These students are collectively brainwashed.