This is forced indoctrination of students[1] into a warped political correctness mindset. Harvard and Yale have both become colleges that I would keep my kids far, far away from. The Office of Equity, Diversity and Inclusion at Harvard has distributed what they are calling “Holiday Placements for Social Justice” in an undergraduate dining hall. The placemat’s content was taken “word-for-word” from a poster created by a group named Showing Up for Racial Justice. The aim of this group is to move ‘white people to act as part of a multi-racial majority for justice with passion and accountability.’ Screw that. A recent article on their site stated: ‘we know that racist vigilantes and the police force have a long, collaborative history with one another.’ These people are preaching sheer cop hatred and racism. 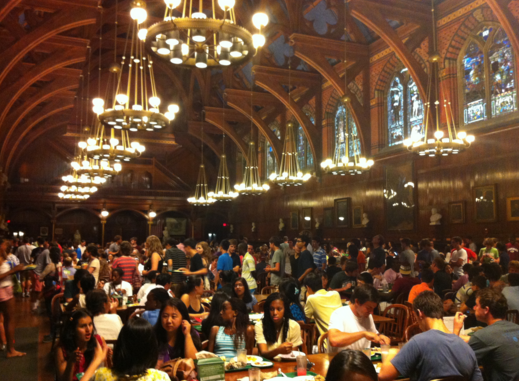 The Office for Equity, Diversity, and Inclusion at Harvard University distributed what it is calling “Holiday Placemats for Social Justice” on campus to help freshmen students navigate difficult conversations when they return home for Christmas break.

The placemat, a copy of which was obtained by Campus Reform, offers students tips for talking to their family members about controversial topics such as “Black Murders in the Street,” “House Master Title,” and “Islamophobia/Refugees.” The placemat, divided into four possible topics of conversation, provides students with a series of sample questions they may encounter when they return home to their families along with an acceptable response to each question.

Under the topic “Black Murders in the Street,” students are advised to prepare answers to the question: “Why didn’t they just listen to the officer? If they had just obeyed the law this wouldn’t have happened.”

Students are advised to say to their families: “Do you think the response would be the same if it was a white person being pulled over? In many incidents that result in the death of a black body in the street, these victims are not breaking the law and are unarmed.”

They want the students to memorize these placements, so when they go home for the holidays they can fight with their parents and families on these subjects and beat them down with social justice talking points. Other topics covered are the “House Master Title” and how evil and offensive that is because of its connotations of slavery. The placemats also imply that Harvard students should be prepared to defend the motives of black student activists at Yale University. The biggest topic on the mat is Islamophobia and refugees. This is pure politics and a move to force the acceptance of Syrian refugees and the terrorists that come with them. It demands the acceptance of Islam or you are a racist, hater, bigot, Islamophobe or some such nonsense. They should look up the fact that the US has a religious and political leanings test for admission into our nation. For an institution that puts forth the separation of church and state, it seems to me that Harvard is using both the Islamic religion and Democratic policies of the state to brainwash their students into compliance. If that’s higher ed, I think I’ll pass. 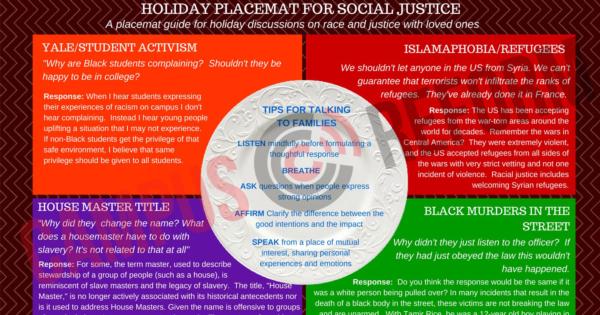