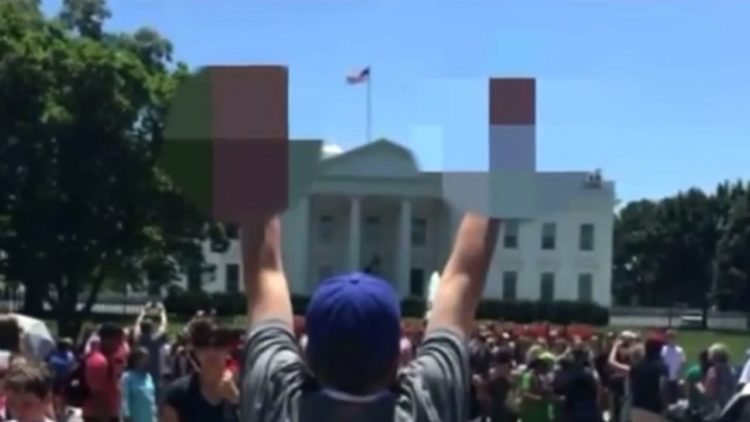 School trips to D.C. to explore the capitol and take photos in front of the White House are common enough, but one Missouri middle school teacher decided that being childish and disrespectful is exactly the way he wanted to remember his chaperoning duties.

The image shows the teacher, Lynn Miller, flipping off the White House. The image was uploaded to Facebook. None of the nine students witnessed the initial photo being taken, but it was later found on his profile page. It turns out that the science teacher at Warrensburg Middle School told students earlier, while at the airport in Kansas City that he would “give the finger” to the White House (and, we assume, its Presidential occupant).

As reported by Fox4 in Kansas City[2]:

John Hammond says his 14-year old daughter, Corrine, was one of nine students who went on a school-endorsed trip to Washington D.C. last week. While students were outside the White House on June 2nd, one teacher, Mr. Lynn Miller, who was serving as a chaperone, snapped a photo of himself making an ugly gesture toward the White House.

Corrine Hammond says Miller, who works as a science teacher at the middle school, told students at the airport in Kansas City that he planned to “give the finger” to the White House. Ms. Hammond says no students witnessed the gesture in person. Instead, Miller advised students to go to his Facebook page, where he’d posted the photo.

Some time after posting the picture to his social media, Miller deleted the photo.

The Warrensburg School District which the school-endorsed trip was attached to are saying that this wasn’t a school-sponsored trip, but John Hammond, a former U.S. Marine with 23 years experience, says that it was school sponsored in the fact that it was promoted by the school system despite being coordinated through the tour group World Stride.

So far, World Stride has not responded to comment and Miller’s wife is saying that he is currently out of town and unavailable to comment on his actions.