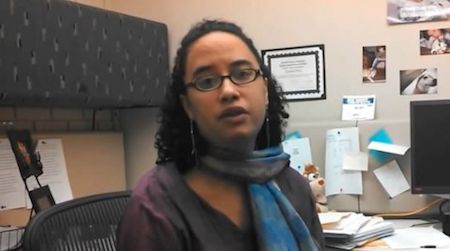 A Minnesota college has reprimanded a faculty member for creating a “hostile learning environment” by targeting “students based on their race and gender.” The faculty member is black; the complaining students are white.

When three white male students in: Shannon Gibney’s mass communication class at: Minneapolis Community and Technical College: complained because she discussed structural racism in every class, Gibney invited the students to file a racial harassment complaint. The students took her up on the suggestion, according to: The Raw Story.

“It was inappropriate for you to single out white male students in class,” Lois Bollman, the college’s vice president of academic affairs, wrote in a letter of reprimand to Gibney. “Your actions in [targeting] select students based on their race and gender caused them embarrassment and created a hostile learning environment. For that reason, I have determined that a reprimand is warranted.”

This isn’t the first time Gibney was criticized for going over the top in directing racially charged comments to people of color.

In 2009, she was invited to speak to the staff at City College News, the college’s student newspaper, and used the occasion to criticize white editorial staffers for not doing enough to combat structural racism, according to: Minneapolis City Pages.

One of the editors who were singled out, identified only as Ryan, responded with this email to Gibney:

I found the nature of your comments to be inflammatory, racist, and sexist—”its been white men.” A statement such as this that implicates some hidden discrimination within our institution in one blanket hateful generalization is both unprofessional and violates the mission statement of MCTC. I would ask you to stop such gross generalizations because they are indeed racist, sexist, and simply hateful. It would be the same as standing up in class and stating that, “I hate all these black women because they always are irrationally screaming at other people.”

Instead of backing down, Gibney copied students and other faculty members in her reply to Ryan, prompting him to file a formal complaint claiming that Gibney violated his rights under the federal Family Educational Rights and Privacy Act.

Ryan told City Pages that although he doesn’t believe the incident resulted in a formal reprimand, he believes Gibney was verbally admonished.

Gibney is one of seven employees who have filed a class action lawsuit against the college, alleging that it creates a discriminatory workplace environment.

She referred to the reprimand letter at a meeting with lawyers investigating the litigants’ claims, stating that the vice president’s words “have helped those three white male students succeed in undermining my authority as one of the few remaining black female professors here.”

Whites comprise the: minority at Minneapolis Community and Technical College.