Turn In Students of Concern to the Behavior Assessment Team

A reliable indicator that the free marketplace of ideas has been replaced by an authoritarian echo chamber in which deviation from establishment dogma is not allowed is that students are encouraged to report thought criminals to officials:

[T]he dean’s office of Utah Valley University, a public institution located in the north-central part of Utah, distributed a guidance letter to all faculty encouraging them to report to the school’s Behavior Assessment Team any students who use “inappropriate language,” are “argumentative,” or who speak “loudly.”

The letter, titled “Recognizing and Responding to Students of Concern,” was provided to The College Fix by a professor at Utah Valley. …

The professor who provided the memo to The Fix said it was distributed one day after an administrator told faculty at a back-to-school meeting that if they heard a statement that made Utah Valley University seem “less inclusive,” that statement should also be reported to the Behavior Assessment Team.

“I’m afraid that this Behavior Assessment Team is a bias response team in disguise,” said the professor, who asked to remain anonymous to avoid professional retribution.

“Bias” is a synonym for “thought crime.”

“Yes, even in a deep-red state at a university in one of the most conservative counties in America, faculty are afraid to speak their minds publicly if their opinions aren’t 100 percent politically correct,” the professor told The Fix.

The scholar added he sees the Behavior Assessment Team as “a tool of intimidation instead of a tool to foster inclusion.”

Most will find it more prudent to keep their non-leftist views to themselves than to risk being identified to the Behavior Assessment Team as a Student of Concern. 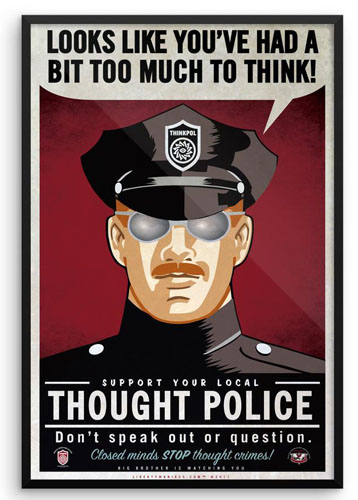 On tips from Stormfax and J. Cross-posted at Moonbattery.