It appears that flyers plastering the University of Kansas that depict anarcho-capitalism and the slogan “Make America Great Again” as coded language for Nazism have been traced to their source — the university’s own School of Social Welfare:

The flyers in question were found throughout campus Tuesday, including in Strong Hall and Twente Hall, and were sent anonymously to Campus Reform by students believing them to be the work of informal “anti-fascist” student groups that have sprung up in the wake of Donald Trump’s election.

In addition to deciphering “coded” neo-Nazi language, the flyer warns that “opponents of safe spaces” may be more prone to joining white nationalist groups, and suggests that flyers from “hate groups” on campus should be torn down and reported.

Campus Reform reached out to Stand With ME—an anti-fascist, anti-Trump group at KU that recently labeled Young America’s Foundation a “hate group”—to ask whether the group was responsible for the flyers.

Stand With ME denied responsibility, but praised the flyers, which they jubilantly claimed had been created and distributed by the School of Social Welfare.

Students, their parents, and taxpayers all put up big money for the sake of education. Too often, we get juvenile propaganda instead.

You do not need a degree in political science to be aware that anarcho-capitalism is the polar opposite of statist/collectivist ideologies like Nazism and communism. But after earning a degree from the School of Social Welfare, you might not have a clue — although you would know that anyone with a Make America Great Again hat is a Nazi. 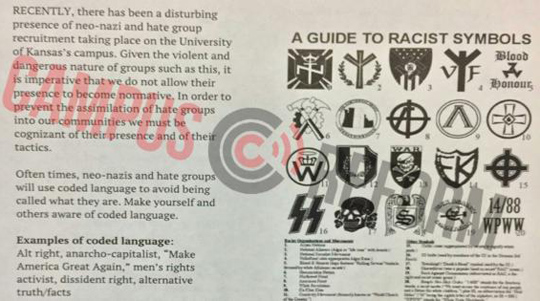