This is just plain stupid[1]. Now everything is deemed racist. Simply being among a majority of white students in a classroom is now termed ‘Microaggression.’ What utter bull crap. You know what? Everyone feels out of place in college and like they don’t fit in – even white people. It will come as a shock to these people that white students don’t get called on either in class. Get over yourselves. What is wanted here is that white people are labeled as inferior and that deference should be given to those of color. That’s racism in itself and cultural elitism or cultural cronyism if you prefer. This isn’t about racism – it’s about racial superiority and it is meant to create conflict. By declaring racial microaggression, you are engendering aggression among the students. And they know it. 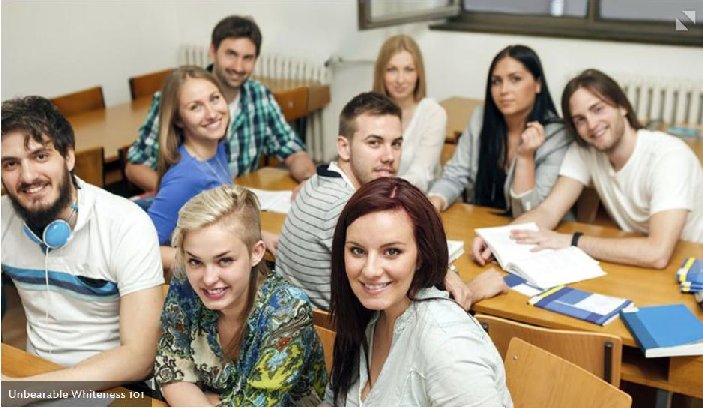 Apparently, just being in certain rooms is a microaggression.

According to a new report[2] released by the University of Illinois at Urbana-Champaign, just “walking into or sitting in” a classroom full of white people is a microaggression in itself.

“Students of color reported feeling uncomfortable and unwelcomed just walking into or sitting in the classroom, especially if they were the only person of color, or one of a few,” stated the report, which designated the experience a microaggression.

“People do not necessarily say I do not belong, but I feel as if I do not when I am in a classroom and I am the one non-White person,” said one student, identified as a Latina female, who is quoted in the report.

The report, titled “Racial Microaggressions,” was based on an online survey of more than 4,800 students of color during the 2011–12 academic year, and it found more than 800 examples of such microaggressions on campus. Now, that may seem like a lot — but it’s important to recognize that this high number could signify the prevalence of a tendency to assume that almost anything is racist rather than the prevalence of racism itself.

But a lot of the report’s “most commonly described” racial microaggressions could also be interpreted as having nothing to do with racism at all. “Being the only student of color in the classroom” was on that list, as was “being discouraged during meetings with one’s academic advisor” (one student determined that her adviser had questioned her choice of major only because “she realized I was African American,” and therefore, “in her mind, I wasn’t able to successfully complete the major”); “being dismissed or ignored by the instructor before or after class” (an African-American male stated, “when I raise my hand, I am often not called upon”); “receiving hostile reactions to participation in the classroom discussion” (one student said she has “witnessed and felt that when a minority student tries to correct [a] comment . . . they are then viewed as angry or defensive when in reality they are simply trying to inform others of what is true”); and “being excluded from participating in a group project” (one student says he keeps quiet in these situations because “I feel as though what I have to say often doesn’t matter to the rest of the group members.”)

But don’t advisers question students’ major choices all the time? Isn’t that actually their entire job? Hasn’t every participation-eager student had a professor that he feels doesn’t call on him enough? Isn’t it possible that people who act annoyed or upset about being publicly corrected are just upset about being publicly corrected in general rather than because they were corrected by a minority student specifically? Doesn’t the group-project example sound more like the kind of general shyness/self-doubt/social anxiety that anyone can experience rather than a sign of institutional racism?

Despite the fact that so many of these “microaggressions” are designated as such based on questionable assumptions, the study still recommends that the school take drastic measures to stop them: requiring that all students complete a “General Education requirement about race, White privilege, and inequality in the United States” as well as “both a non-Western culture and a US people of color cultural course”; fundamentally altering the curriculum to ensure that a third of all college 101 classes “include diversity and inclusion”; providing workshops, trainings, campaigns, and brochures “to help students identify when racial microaggressions are occurring”; creating a “slogan or language” — such as the phrase “Racism Alert” — to use when they identify one; and developing a “mechanism for students to report perceived racial microaggressions.”

Call me cynical, but I have a lot of doubts about these suggestions. First of all, I could see college students mocking a phrase like “Racism Alert!” rather than taking it seriously, which could just create further discomfort for everyone involved. Furthermore, what material specifically is the report suggesting that the school eliminate in order to make room for this kind of widespread anti-microaggression curriculum?

These stupid moves such as declaring “Racism Alerts!” are just laughable. By encouraging this mentality among colored students, the educational system is doing them a disservice and handicapping them for real life endeavors. You are also holding back good students and the educational process should be colorblind. This whole ‘White Privilege’ mantra is nonsense. Schools should be for competition and education regardless of color or sex. Stop propagating racial division and start educating without politics the way it was meant to be.