Really? I think that this school meant every word of the letter that was sent out by this so-called ‘office employee’, and they only backpedaled when they realized that they were going to catch more than a bit of flack for this poorly written, veiled threat of a welcome back letter[1]: 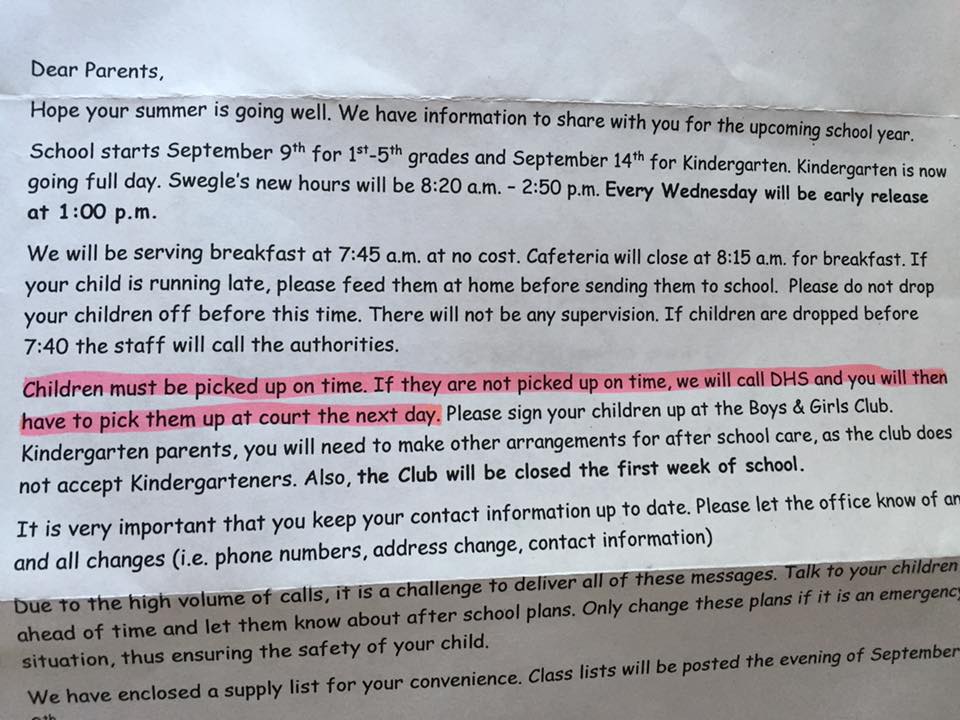 The highlighted portion of the letter reads:

“Children must be picked up on time. If they are not picked up on time, we will call DHS and you will then have to pick them up at court the next day.”
DHS refers to the Department of Human Services in Oregon. Eichenauer told a local TV station:

“My heart kind of skipped a beat a little bit. It’s pretty scary.”
A school district spokesperson said that the letter was sent “in error” because it was written by an “office level employee” and had not been reviewed by the school’s principal. Eichenauer posted on Facebook that she did subsequently receive a phone call from the school with a pre-recorded apology.

IJReview reached out to parents across the country to gauge their reactions to this letter. One woman from Texas could appreciate both sides of the problem:

“I can understand the school’s frustration if it’s been a recurring problem. But that’s awfully extreme as a first line of defense. Imagine how the child feels in that situation — being taken away from your family overnight. You’re punishing the child for something the parents did. I don’t agree with it.”

But a former librarian from Illinois noted that this approach is not uncommon:

“At our library, if children were left after closing time, the librarian in charge and the security guard stayed with them for 10-15 minutes and then called police. Police then took the kids to the police station for parents to pick up there.”

And another Texas mom said that she was aware of even stricter practices:

Uhm, no. You aren’t giving me a colored sign, you’re giving me my freaking kid. This is not communist Russia. I refuse to allow my kids to be in a school where they have to live in fear of the administration. If I got a letter like this, my kids would be yanked out so fast their heads would spin. Just a disgusting game of puppetry they are playing with our children these days. Just disgusting.