Who Knew That A Math Problem Could Go Viral? See the Problem That Americans Can’t Wrap Their Minds Around

And this is why most people hate math and logic[1]. Just sayin’. My IQ is around 140. I did well in math in school, not because I was inclined that way, but because I worked my butt off at it – hating it all the way. In college, I took logic. At first, I was failing it in a grand way. Then a nun-turned-professor took pity on me and showed me some tricks of the trade. I got an ‘A’ in the class once again through sheer work and determination. Having said all that… I could not figure this one out. Good luck trying. 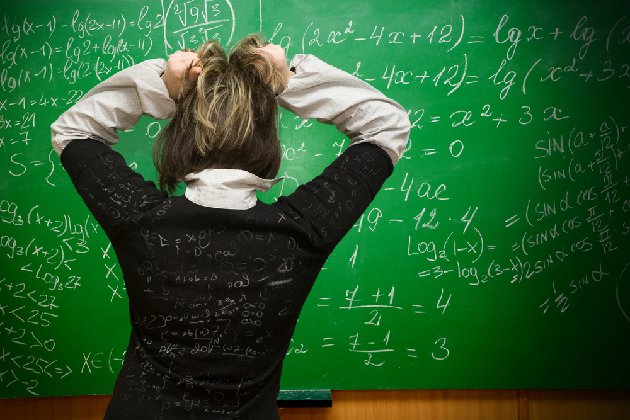 A math problem that comes via Singapore has Americans around the country scratching their heads. If you can figure it out, well, you’re good.

The New York Times picked up on the problem from television host Kenneth Kong in Singapore, and it goes like this: 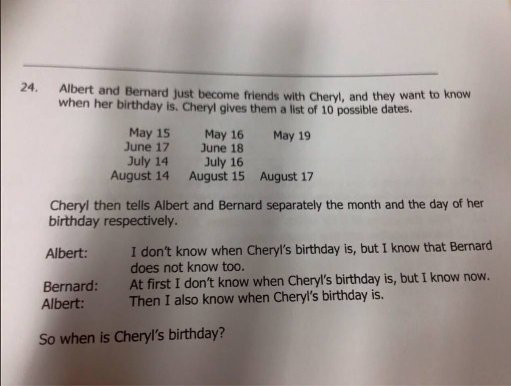 A clear version of the question from NYT:

Cheryl thought a second and said, “I’m not going to tell you, but I’ll give you some clues.” She wrote down a list of 10 dates:

“My birthday is one of these,” she said.

“Can you figure it out now?” she asked Albert.

Albert: I don’t know when your birthday is, but I know Bernard doesn’t know, either.

Bernard: I didn’t know originally, but now I do.

Albert: Well, now I know, too!

When is Cheryl’s birthday?

Now, when it comes to logic questions a few things are off-the-table. No one can be lying; everyone is a faithful reporter.

In order to solve the problem, lay out the dates on a chart: 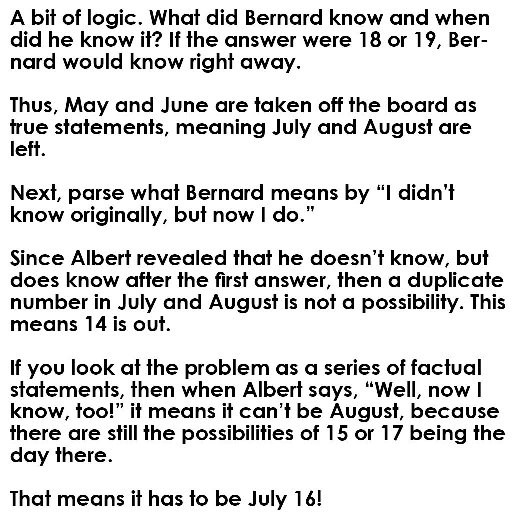 Well, at least we’re not debating about the color of dresses[2], this time.

Can you solve the problem, or more importantly, can any of your friends?

This little exercise frustrated me and gave me a headache. I also wasted half an hour of my life I’ll never get back and I still don’t see how the answer was arrived at. I’m sure some of you will figure it out effortlessly and I commend you for it. Me, I just felt like chucking the monitor out the window vigorously while expanding my vocabulary with colorful words. Give this to your friends and family and see if any of them can noodle it out. Then I suggest you go have a drink and watch Grimm.