Y’all remember the witch hunt over Halloween at Yale right?[1] Headmaster Nicholas Christakis declared in an email sent out by his wife that Halloween should be for everyone. And if you are offended, basically get over it. He was accosted on campus by some Marxist troll who had no respect for him and screamed at him at length surrounded by a pack of young jackals who were daydreaming of tearing the headmaster limb from limb I’m sure. Christakis stood his ground and did not bend to political correctness. He was saddened by the censorship and prohibition put forth by the students and the administration there. Well, these thugs got their way. Christakis and his wife are both leaving indefinitely. I’m sure they are thrilled about that. 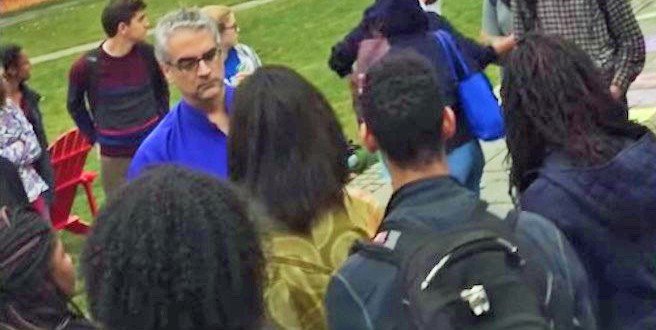 The week after Halloween, Yale students gathered[3] to confront a headmaster, Nicholas Christakis of Silliman College at Yale, regarding an email that had been sent out by his wife Erika, also a lecturer at the University.

The email in question read:

“Is there no room anymore for a child or young person to be a little bit obnoxious… a little bit inappropriate or provocative or, yes, offensive? American universities were once a safe space not only for maturation but also for a certain regressive, or even transgressive, experience; increasingly, it seems, they have become places of censure and prohibition.”

Christakis wrote the email as a response – and a challenge – to the administrators and students at the school who had sent out an approved list[4] of “non culturally appropriating” Halloween costumes as a student guideline.

The students challenged Nicholas – who had defended his wife’s email – publicly:

They demanded that he step down if he couldn’t do his job, which they claimed had more to do with “making students feel at home” than with creating an intellectually stimulating environment.

Both Christakises[5] remained on campus following the incident, but this week they announced separately that they would not be returning to teach in the spring. 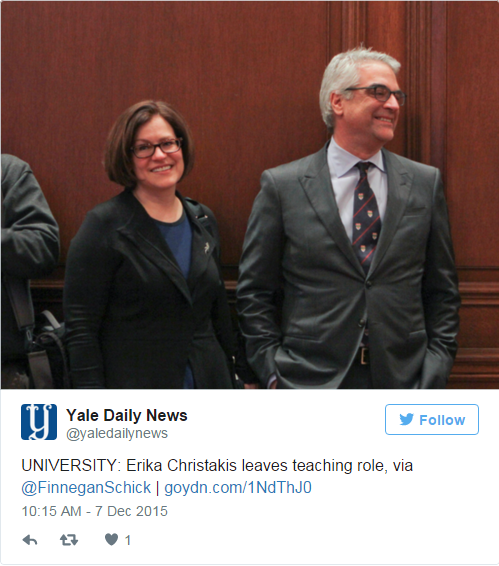 Erika said her break from teaching would be indefinite:

“I have great respect and affection for my students, but I worry that the current climate at Yale is not, in my view, conducive to the civil dialogue and open inquiry required to solve our urgent societal problems.”

Yale University said that the Christakises were free to choose whether they would teach in the future, but added that they planned to change their titles. The “-master” part of “headmaster,” according to administrators, can evoke thoughts of slavery and is unacceptable in a modern setting.

What a loss for Yale and for our nation. Things are coming apart at our universities and in our culture here in an ever increasing spiral of destruction of liberty. Behind it all, you will find communists as usual. I don’t blame the Christakises for leaving. There are a multitude of intellectual and professional pursuits they can choose from that are enlightening and free. Yale is no longer one of those venues unfortunately. They are even renaming the title ‘headmaster’ as they say it invokes thoughts of slavery. What incessant morons they are. I’m sure the students will feel at home now that the ranks have been purged of freedom-lovers such as the Christakises. I suggest you mark Yale off as a collegiate choice for your children.