Trump FREES American Wrongly Imprisoned 3 Years In Egypt, But What He Just Did At WH For Her? AMAZING! [VIDEO]

President Trump did something that Barack Obama[1] was unable to do during his presidency… I know, there were so many things. He freed Aya Hijazi from an Egyptian hellhole prison. She’s a humanitarian aid worker who had been thrown in prison under false pretenses. Trump struck a deal with Egyptian President Abdel Fatah al-Sissi and the next thing she knew, Aya was free. The art of the deal in real life. After she was released, President Trump had Aya and her family come to the White House to be honored and visit. I’m certain she never thought it would end like this with a happy outcome after all this time.

Trump praised Aya[2] and her resolve during her ordeal. Trump diplomacy in action and it’s a hell of a lot better than Obama’s. Three years in a Cairo prison is something no one should ever have to endure, especially a young woman like this. The president said he was “very happy” that Aya Hijazi, 30, was flown back to the US on Thursday night. Aya’s charity cared for street children. She was accused of child abuse and thrown in a hole to die. 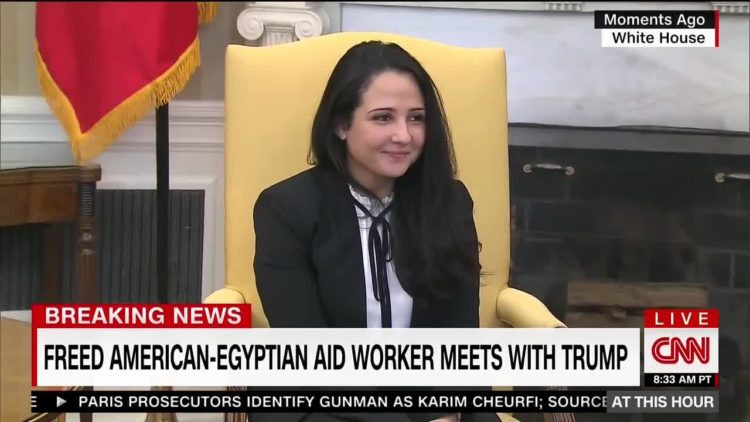 Egypt released Aya Hijazi from prison Thursday evening after President Trump struck a deal with Egyptian President Abdel Fatah al-Sissi, but POTUS took the goodwill one step further Friday morning by hosting her and her family at the White House.

Hijazi, a humanitarian aid worker, had been imprisoned for three years under false pretenses, and President Trump praised her resolve during an on-camera press session in the Oval Office.

Aya’s release was reportedly agreed upon before Trump met Egyptian President Abdul Fattah al-Sisi this month. “We are very happy to have Aya back home,” President Trump said on Friday at the White House. “It’s a great honor to have her in the Oval Office with her brother.” Ivanka and Jared were also there to welcome Aya and her brother.

Aya, a US citizen with dual nationality, and her Egyptian husband, Mohamed Hassanein, set up the Belady Foundation in 2013 to aid street children.
The couple were arrested a year later along with four other humanitarian workers, whose release has also been secured. They were acquitted last Sunday of child abuse and trafficking charges which had been dismissed by US officials as bogus. Chaperoned by top American officials, Aya and her husband touched down in a military aircraft at Joint Base Andrews, near Washington DC. Dina Powell, the President’s Egyptian-American Deputy National Security Adviser, accompanied the couple on the flight home.

Trump embraced a dictator[5] to save the lives of these people. I think he is doing the same with Erdogan in Turkey because there is an American being held there as well. Things are rarely what they seem in politics and Trump is using diplomacy first and foremost to get our people back. I’m sure that Trump was also prepared just in case it all went sideways. Something that John Hawkins covers in his new book, ‘101 Things All Young Adults Should Know’. Thankfully, this worked and it would seem that Trump’s critics are wrong. He is neither clueless or randomly embracing dictators… he’s saving American lives and doing it behind the scenes.