Why the heck not? If my alma mater, Jacksonville (Ala.) State University, can beat Ole Miss[1], anything is possible. If there really is going to be a Republican tsunami[2] Nov. 2 there is no reason to think Maryland voters would reject a fine Senate candidate like Jim Rutledge[3]:

[4]James B. Rutledge, III was raised on a beef cattle farm in Harford County. His father was a veterinarian and his mother an artist and antiques dealer. Rutledge’s mother comes from coalminers that immigrated in the 1800s. His father comes from farmers who first came to Maryland in the 1600s.
Rutledge attended North Harford High School (1979) before graduating with his Bachelor of Arts from the University of Georgia (1983), Magna Cum Laude. While at the University of Georgia, Rutledge was admitted to the Phi Beta Kappa honor society and was the Captain of the University’s club lacrosse team. Rutledge obtained his law degree from the University of Maryland in 1986 With Honors, where he represented the poor and disenfranchised of Baltimore, Co-Chaired the Moot Court Board, and served as a Special Master of the Orphans’ Court of Baltimore City. . . .

You can read the rest of that distinguished résumé[5]. The Rutledge campaign didn’t go with my suggestion for a slogan — “Barbara Mikulski: Too Ugly for Too Long” — but we’ll let that slide. We’ve blogged about Rutledge earlier[6] and so you already know that Jim needs your contributions[7] to help him win the Sept. 14 GOP primary. Now let’s talk about another top-notch Maryland GOP candidate.

The Democrats are reportedly resorting to “triage”[10] in a desperate effort to hang onto their endangered majority. If they’re doubling down on defending incumbents who are obviously endangered, it’s possible that they might be caught looking the other way on some of their supposedly “safe” seats. For the same reason that John Dennis[11] could sneak in and blindside Nancy Pelosi, Charles Lollar may deliver an unexpected shocker to Hoyer. And let’s look at Lollar’s biography[12]: 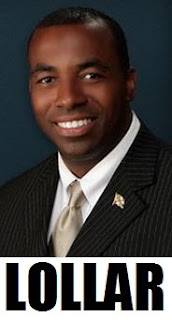 [13] Charles Lollar is a concerned citizen, taxpayer, hard working business executive, Major in the United States Marine Corps Reserves and most importantly a father of four and a devoted husband. . . .
At the age of 13 Charles delivered newspapers before going to school every morning. He worked his way through both high school and college by bagging groceries, stocking shelves, and selling items door-to-door.
After attending McEachern High School, Charles earned an AA degree from Emory University, a Bachelor’s of Science degree in Political Science from Kennesaw University and an MBA from Regent University. . . .
Charles proudly served his country in the United States Marine Corps where he was on active duty in Kosovo. During his time as an active-duty Marine, he graduated from Officer Candidate School and was awarded several medals and decorations including: the Kosovo Campaign Medal, Navy Unit Commendation, Combat Action Ribbon, and Joint Meritorious Unit Award. Presently, Charles serves as a Major in the Marine Corps Reserves where he is an intelligence officer. . . .

You can read the whole thing[14], but . . . Wow, what’s not to like? The fact that he’s from my neck of the woods — McEachern High is in Powder Springs, Ga., just up the road from my hometown of Lithia Springs — is an obvious point in his favor. Even more impressive, of course, is that he’s an up-from-the-ranks Marine Reserve officer. Semper Fi!

Lollar has been endorsed by Combat Veterans for Congress[15], which has the support of Sarah Palin[16] and Ed Meese[17], so he’s obviously got solid conservative credentials. Now let’s address the question that the doubters always ask: Can he win?

Democrat enthusiasm is way down this year, so the turnout is likely to be far lower. In 2006, there were barely 200,000 votes cast in the 5th District race. So if there is a similar turnout Nov. 2, and Lollar merely matches the GOP’s 80,000 total from 2008, that puts him at 40% — add another 20,000 votes from fed-up-with-Obamanomics Tea Party types, and an upset becomes feasible.

Bailey is seeking the GOP nomination again this year, and I’ve got nothing against him, but Lollar’s impressive résumé clearly makes him the stronger challenger to Steny Hoyer. Here’s video of Charles Lollar in a Fox News “Strategy Room” interview:

I repeat: What’s not to like? Your contributions[20] to Charles Lollar can make the impossible happen Nov. 2.