Day 2 of the DNC was a terrible, horrible, no good, very bad day for the Democrats.

It started with an attempt to fix a previous mistake: The Democrats were going to put “God” and making Jerusalem the capital of Israel back into the DNC platform. In and of itself, that move just drew more attention to the fact that God and Jerusalem had been taken out in the first place; so even if all had gone well, they probably would have done just as well leaving it alone. However, things went tragically awry.

Leave it to Democrats to hold an election on the existence of God, then fix it.

They even managed to irritate liberals in the bargain because as the Huffington Post made clear, the Left doesn’t want God or Jerusalem as the capital of Israel in the platform. 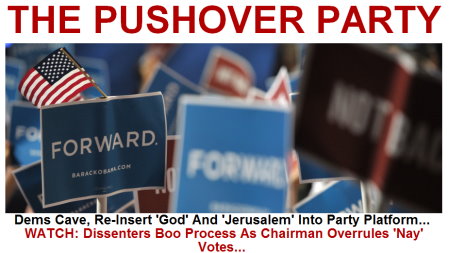 That’s just about the worst way to start off a convention humanly possible and they followed it up with a heaping helping of punishingly boring hacks. Speaker after speaker mouthed repeated tired lines, ineffectively attacked Mitt Romney (Like the audience is just going to take a Democrat’s word for it when he claims that Mitt wants to give them cancer, eat their baby, or put them in chains). They really went to an extreme hammering home how much they love abortion. They even brought the head of Planned Parenthood up to speak.

They should bring someone up from the crowd and do an abortion right there on stage and get it over with. #DNC[3] #Wegetityouloveabortions[4]

It was actually surprising how dull and ineffective the speaking line-up was for 8 PM EST to 10 PM EST. It was dull, tired, transparent political hackery that didn’t appeal to independents or fire up their base. They even had, I kid you not, an ILLEGAL ALIEN speaking from the stage. That may be one of the all-time low points in the history of modern political conventions. The illegal was followed up by a speaker who made it clear that the Democrats want to give citizenship to every illegal alien in America. The Democrats may think that will help them with Hispanic voters, but as we’ve seen time and time again over the last few years, that pathway has a buzzsaw in the middle of it called the American voters.

If this comes across as exciting, well, it wasn’t. In fact, it was so dull that even Cenk Uygur was zoning out.

Since there was nothing of interest going on up on the stage, people were speculating about everything else.

This convention started with the debt clock hitting 16 trillion and will end with the jobless numbers going up. #notagoodsign[10] 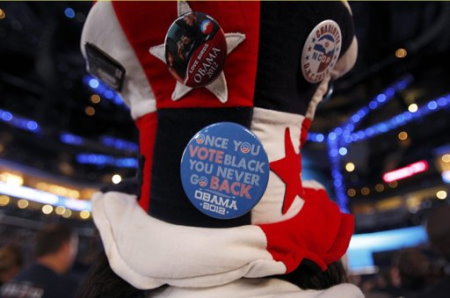 Apparently, @sandrafluke[13]‘s speech was cancelled at #DNC2012[14]. In probably unrelated news, Bill Clinton is in the building.

That last tweet about Fluke was referencing the fact that she missed her scheduled speaking time. It turns out that they’d moved her to the 10 o’clock hour where they apparently wanted a 30 year old college student who needs the government to subsidize her birth control, a fake Indian, and Bill Clinton to close them out. Clinton’s understandable, but Fluke and Warren were horrible choices whose speeches were well received by the audience, but did nothing to reach to independents, who were more likely to be turned off than attracted by what they had to say.

Hoooooooray! A 30 year old student who needs a government subsidy to pay for her birth control. Let us partake of her great wisdom! #DNC[3]

Wait, who’s this Native American lady? Look at those cheekbones!!!!

Then, it was Bill Clinton’s turn. For all of his flaws, Clinton is a masterful speaker. This is a man who understands how to deliver a speech. Tonight, he essentially delivered two speeches in one.

The first half of the speech was extraordinary. The delivery was great, he was funny, the message was pitch perfect — it was better than anything else that had been done so far. Why was it so good? Because Bill Clinton’s message was…

1) I disagree with the Republicans, but I don’t think they’re bad guys. We just don’t see eye-to-eye on the issues.

2) Barack Obama was handed a horrible mess when he was elected and admittedly, things aren’t going that great. However, nobody could have fixed things by now and what Obama has done is lay the foundation for a better, more modern economy.

1) The Republicans are horrible people!

2) Everything is going great and if you think something isn’t going well, blame it on Bush.

Had Clinton stopped about halfway through his speech, whoppers aside, it probably would have been the single best speech anyone had given at either convention. Love him or hate him, when he’s on, Clinton is the speaker that Chris Matthews thinks Obama is.

However, Clinton didn’t stop there. Instead, he decided to launch into a long, rambling, shifty, and yes, very boring explanation of different issues. The crowd, which was in the palm of his hand, lost its energy and got bored as the speech went on…

Well, if a guy who was impeached for perjury says it’s not true, you can take that to the bank. #DNC[3]

This speech was killing it at 15 mins. Now, it’s bordering on a hostage situation.

It was like the merger of a big, powerful, charismatic “A” speech with a small, weak, dull “D+” laundry list of a speech. The final product was probably a B or even a B-. Not only did a lot of people tune out, they also had time to remember that the guy explaining policy issues to them may be very likable, but he’s also a really good liar and they can’t take anything he says at face value.

All in all, tonight was so bad that Democrats should hope viewers tuned into the Cowboys/Giants game instead of watching this debacle. For independents, other than listening to Bill Clinton’s speech, which probably made them yearn more for Bill Clinton than Barack Obama, there was very little that would appeal.

A Democratic National Convention Review: Day 1 (Israel & God Are Out, Obamacare And Repeating Forward 12 Kajillion Times Are In)[23]