We’re 11 days out from the election and although it’s very close, Mitt Romney has the momentum and appears to be a little bit ahead, although it’s possible it could still go either way. Although poll numbers tend to be particularly fluid this late in the race, the best way to break things down is to start with the RealClearPolitics Election Map[1]. 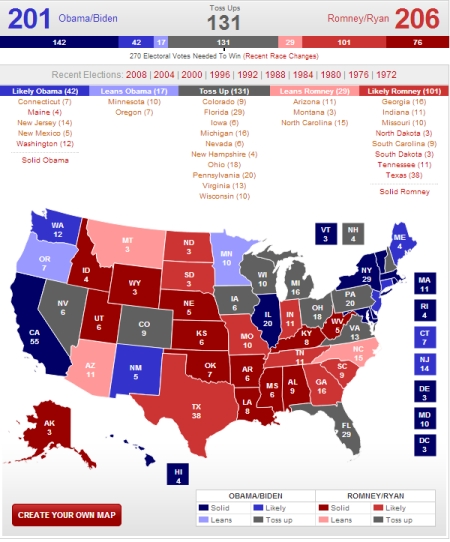 Barring a landslide, the bottom number for Obama is 201 while Romney’s worst possible outcome is 206. It’s worth noting that there are some analysts — Dick Morris, for example — who believe that both Minnesota and New Jersey could potentially be in play. Personally, I think New Jersey is out of reach — although if the Romney campaign were to make a strong push in Minnesota, it seems conceivable that NJ could move into the Romney column. However, given the number of other key states in play, that probably won’t happen.

Now, let’s talk about the toss-up states where the election will probably be decided.

Out of the states listed above, here’s how they’re currently trending based on the poll data, although given the size of the margins, all of these states are still potentially in play for both candidates.

Out of the two candidates, if you had to pick which one you’d rather be at this point, you’d definitely choose Romney.

If much of the polling out there is dramatically oversampling Democrats as many people believe, he wins. If, as expected, the independents break heavily his way at the end, he wins.

That doesn’t mean Mitt has this in the bag, but his campaign is well positioned to put the race away.

As the final voters make their decisions and the polling data pours in over the final ten days, we should have a clearer picture of where this race is headed although it is entirely possible that it will still be too close to call with certainty on Election Day.