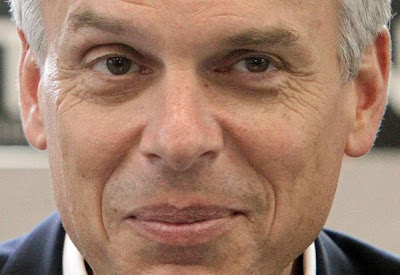 For weeks, I’ve been mystified and irritated by the media’s love affair with Jon Huntsman, the former Utah governor who joined the Obama administration[2] just about the time most conservatives were joining the Tea Party movement.

Why the hell is this guy — “Governor Asterisk,” an irrelevant distraction, a Charlie Crist clone who represents no actual GOP constituency — being included in the Republican debates and treated with fawning deference by the media? After last night’s debate, when Huntsman attacked Rick Perry as “anti-science”[3] for his skepticism toward global warming, I remarked, “Might as well invite Al Gore to the GOP debates[4].”

Turns out that remark was more accurate than I suspected because, just like Gore, Huntsman is a two-faced hypocrite whose “green” rhetoric doesn’t match his record. Although Huntsman has been called[5] “the greenest Republican in the presidential race” — which may account for the MSM’s otherwise inexplicable crush on him — his actual record has been exposed by the Environmental Integrity Project in a devastating report[6] full of nasty little details like this:

[E]missions at two Huntsman Chemical plants increased significantly between 2009 and 2010, by more than 50 percent at the company’s facility in Port Neches, Texas. While the candidate is no longer a manager of The Huntsman Corporation, recent data show that he is heavily invested in the company. Furthermore, John Huntsman Jr. was a member of the board of directors when Huntsman employees committed the illegal acts that led to the company paying a substantial civil penalty and saw two managers sentenced to jail terms for illegal releases of benzene. . . .
None of the other candidates has a history of actual regulatory run-ins with the EPA, and none of them has a family connection with a corporation that is a major polluter today.

So while managers of his company go to jail for illegal pollution, Huntsman wants to go to the White House as a Friend of Gaia.

No wonder the liberals love him: He’s almost as phony as Obama.