Rick Perry Did A Townhall In Conway, SC….And I Missed All Of It

Congressman Tim Scott[1] invited Rick Perry[2] to a Townhall in Conway, SC. The event was held at Horry Georgetown Technical College, which I was unfamiliar with. Unfortunately, I had some GPS issues and instead of getting there 20 minutes early as I’d planned, I arrived at 10:00 AM on the dot. That was right when the event was supposed to start.

That turned out to be quite the problem because so many people turned out to see Perry, that it had gone beyond standing room only, and the fire marshal had said no more attendees would be allowed into the building. Immediately, I tried to play the press card, but discovered to my chagrin, that I’d forgotten my business cards.

Still, I don’t give up easily. After talking to the local security, I tried talking to a member of Perry’s security. About that time, Rick Perry unexpectedly showed up and started walking in the buildings through the 30-40 people who couldn’t get in. 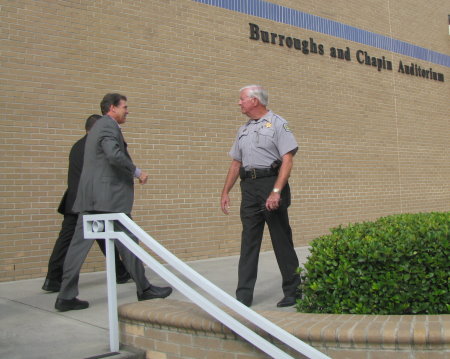 He was only out there for a few moments and he was in constant motion. On the upside, I got to shake his hand, but on the downside, I didn’t have a chance to take a picture with him and the pictures I snapped of him weren’t very good. 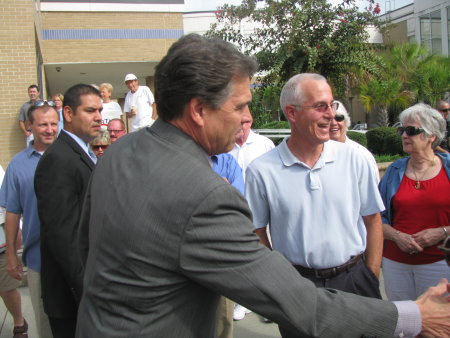 However, all hope wasn’t lost. I grabbed one of Perry’s staff, told him I was press with Rightwingnews.com and asked him to get me in. He said he would go in, check on it and be right back.

He never came back.

At this point, it wasn’t looking good. But, I figured if I drove all the way there, I might as well go all the way. So, I grabbed my Facebook pal, Sonya Sasser, and said, “Let’s see if we can find a back door.”

She seemed a little apprehensive about it, but we started walking and went in the backside of the building. Unfortunately, there was security watching us from the moment we walked in; so we couldn’t duck into the event. I tried playing the press card again, sans credentials, but they told me it was so full that they wouldn’t even let press in the event. Last but not least, I tried bribing the security guard, but I only had $10 on me, which unsurprisingly wasn’t enough to do the job. On the way out, I even asked her if there was another way to sneak in. Of course, the answer was no…and that was the ballgame.

So sadly, I didn’t get to see Rick Perry answer questions and interact with the crowd. That was bad for me, but on the other hand, that’s the first event I’ve been to in this area that had an overflow crowd — and it was at 10:00 AM in the morning. So, from Perry’s perspective, he’s drawing big crowds in a key primary state. That’s a good sign.

Next time, I’ll just have to get there a little earlier.