The Democratic National Convention Day 3: (Obama Strikes Out And Dolan Strikes Back)

The Democratic National Convention[1] started with the national debt clock hitting 16 billion dollars, the Dems booed God and making Jerusalem the capital of Israel in the middle, and it’s going to end with the jobless rate going up at the end of the week.

The first night of the Democratic Convention was mediocre and the second night was such a trainwreck that it probably cost the Democrats votes. However, the third night of the convention was more professionally done. The quality of the speakers was higher, the speeches weren’t quite as radical, they had more big names — it was just more solid.

That’s not to say it was all good. Jennifer Granholm did a weird, screaming speech where she was so overexcited that you expected a Howard Dean style YEEEEEEAAARRGGGGHHHHHHHHHHH at any moment.

I think Jennifer Granholm has been getting tips from Vince at Shamwow. #DNC[2]

They also went overboard in talking about how amazingly, incredibly, awe-inspiringly wonderful the bailouts of GM and Chevrolet are. Setting aside the fact that the American people aren’t in love with the idea of bailouts to begin with, the taxpayers lost their shirts on the deal.

I agree with Eva Longoria. She doesn’t need a tax cut. That’s why I favor a 95% tax rate on all income over 100K for actors and musicians.

John Kerry wasn’t bad, although there were rather notable hiccups in his speech. For one thing, Kerry played the flip-flop card against Mitt, which is sort of like being called a womanizer by Bill Clinton.

“Hey, remember when I blew up my own campaign with an inane self-contradicting statement? Makes a good zinger eight years later, huh?”

He was also one of many Democrats talking about how wonderful the last four years have been (more on that later). Kerry even went so far as to suggest that people should ask Osama Bin Laden if he was better off than he was four years ago. Good line, except it brings up a rather obvious thought.

In fairness to Bin Laden, I think his answer to the “are you better off than 4 years ago” question would be bout the same as most others #no[8]

After Kerry, yes, I will go ahead and say it, Biden did a decent speech….

Michelle Obama just gave Joe the, “I know you can put the round peg in the round hole this time” thumbs up you might give to a kindergartner 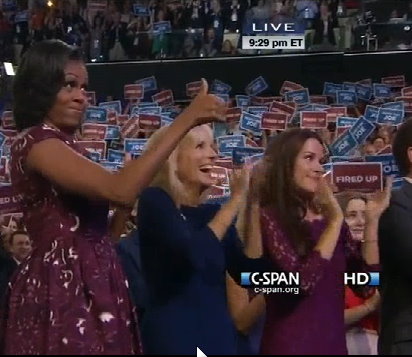 ….well, once you got past his ridiculous flattery of Barack Obama, his talk about how great life has been for the last four years, and the fact he kept saying “literally” over and over.

We LITERALLY stood on the brink of a new depression. But now we’re moving America forward!

Then, it was time for Barack Obama to put an exclamation mark on his party. Here we had a man who has gotten to where he is today in large part because of his speaking ability giving what could very well turn out to be the biggest political speech of his career. He had plenty of time to prepare, the cultish audience was practically ready to worship him, and…he whiffed.

Just scanned the text of Obama’s speech. If you’re hoping for a pivot to the center or an explanation of his 2nd term goals, #nothappening[13]

You can’t present a pedestrian “stay the course” speech if the majority of Americans don’t believe in your course.

It was bad enough that mighty Obama had walked up to the plate and struck out, but that’s when it really started to get fun because Cardinal Dolan was giving the final prayer. The Democrats initially were uninterested in allowing Dolan to pray, but after the Republicans invited him to do the closing prayer for their convention, the Democrats said, “Me too, me too!” Ultimately, that turned out to be a bad move for a convention that booed God and pushed abortion so much that you practically expected them to declare them mandatory for all women.

During his prayer, Dolan slipped in some subtle little jabs[24].

We beseech you, almighty God to shed your grace on this noble experiment in ordered liberty, which began with the confident assertion of inalienable rights bestowed upon us by you: life, liberty, and the pursuit of happiness.

Thus do we praise you for the gift of life. Grant us the courage to defend it, life, without which no other rights are secure. We ask your benediction on those waiting to be born, that they may be welcomed and protected.

Oh God of wisdom, justice, and might, we ask your guidance for those who govern us: President Barack Obama, Vice President Joseph Biden, Congress, the Supreme Court, and all those, including Governor Mitt Romney and Congressman Paul Ryan, who seek to serve the common good by seeking public office. Make them all worthy to serve you by serving our country. Help them remember that the only just government is the government that serves its citizens rather than itself.

And most of all, God Almighty, we thank you for the great gift of our beloved country.

For we are indeed “one nation under God,” and “in God we trust.”

So dear God, bless America. You who live and reign forever and ever.

Of course, this little speech prompted a stream of F-bombs from Christian hating liberals on Twitter[25].

All in all, this was not a good convention for the Democratic Party. This was a very liberal convention that MAY excite its liberal base, but there was just nothing there for independents to grab onto. Most of the speakers on the stage seemed to be VERY HAPPY with how the last four years have gone. That’s not so for the average American. Judging by the convention, the most important issues to the Democratic Party are abortion, gays in the military, union bailouts, and the Lily Ledbetter Act. On the other hand, most independents are more interested in issues like the economy, the debt, and the jobs. The Democrats had very little to say about any of those things that goes beyond “Mitt Romney would be bad” and “Obama is great on those issues!” No shift to the middle was made, no second term agenda was revealed, and very little effort was made to address any of the serious questions about Barack Obama’s performance as President. Instead, independents who tuned in were treated to a delusional celebration of dependence and abortion that was punctuated with the booing of God and Barack Obama essentially saying, “The next four years will be great! Trust my judgment.” After a three day long infomercial, you have to think the Democrats will get SOME KIND of temporary bounce out of this convention, but it was so liberal that it may have actually reduced Obama’s chances of being reelected.