At Least Neither of Them Is Likely to Be Reelected

The silver lining to a contest between two of the worst candidates imaginable is that whichever manages not to lose, we only have to endure the ensuing disaster for at most 4 years. Unless the opposition party somehow comes up with a comparably awful candidate for 2020, neither is reelectable, as can be seen from across the Atlantic.

If Trump stages an upset,

President Trump will be an epic disappointment in office. He won’t get Mexico to pay for the wall, he lacks a clear vision for America beyond his own success, and crucially he won’t transform the lives of the white, less educated, male Americans who voted for him. International market confidence in America would dip after a Trump win. He won’t be able to maintain Obama’s 5 per cent unemployment, and for the folks already feeling left behind by America’s economic fortunes, Trump will be a disaster.

The transition from lofty campaign promises to government was hard enough for Obama, and Donald Trump has over-promised massively without the toolkit to deliver. “Do you feel great again, as unemployment soars?” his challenger in 2020 will demand. That ranting, conspiracy-theorist schtick won’t fly so well once Trump is the commander in chief. A Trump win, by the slimmest of margins, is one he has neither the plans, nor the talent to defend and build upon. He pitches himself as transformational, but he’s more likely to transform America into a nuclear wasteland than he is to make the denizens of America’s trailer parks wealthy.

Donald Trump would spend four years as America’s embarrassment-in-chief, being caught on microphones rating women, and constantly aggravating America’s friends and enemies. America’s loss would be Putin’s gain, and a hawkish Democrat would exploit Trump’s incompetence on the global stage.

President Clinton would enter the White House with horrific trust/likeability ratings. The reality is that the Clintons have been in the public eye for too long, upset too many people, and in four years of office Clinton is more likely to make that position worse than she is to improve it…

After a dozen years of rule by the Democrats, it’s easy to see how many American swing voters would be itching for a chance to give the other team a chance. Hillary enters the White House as one of the least trusted, least popular people to ever get there. Once feminists have finished popping champagne corks, an America that long since made up its mind about Clinton is unlikely to be swayed into liking her more over the coming four years.

There is also the significant possibility that current investigations into her influence peddling and criminal mishandling of classified information will drive her out of office, like Watergate did to Nixon.

Since the election was already lost months ago from the point of view of conservatives or anyone else in favor of sane, ethical government, all we can do now is brace for the coming disaster and prepare for 2020.

If Trump wins, expect a massive backlash against all things perceived as right-wing, which unfortunately will include the conservatives who are currently watching from the sidelines, with no immediate stake in a battle between two progressives. The next president will be someone along the lines of Elizabeth Warren.

If Shrillary wins, it all depends on whether the GOP can put Trumpism behind it without shattering into fragments. 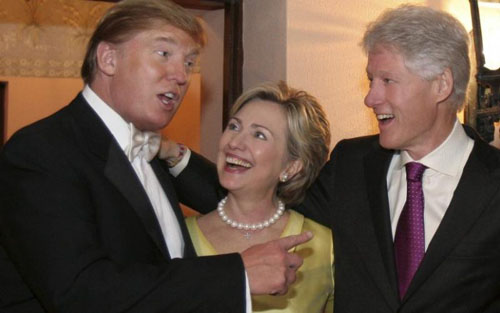 After 4 years we will be blessedly rid of all three.