I feel for this woman[1], I really do. And I agree with her that the candidates need to address those who are devastated by illegal alien crime. But I don’t think another government program is the answer. If they do something like this, then why not for every other victim of crime? With what our country is going through we can’t afford the repercussions of something like this. What we could do is follow the law. Then if someone like this police officer is killed, the police should raise funds to provide for the family. That is the way we have always done this. We need a wall and to seal our borders. We need to cut off all entitlements to illegal aliens and deport them. We need to end sanctuary cities and the refugee resettlement program. Mendoza believes that crimes like the one that claimed the life of her son should be considered “political crimes,” as they are the direct result of the failures of politicians to secure our borders and uphold the immigration laws that are on the books. It’s a horrific crime, but I don’t think you can call it a political crime. Help the victims through charity and community, not through another government-funded program. 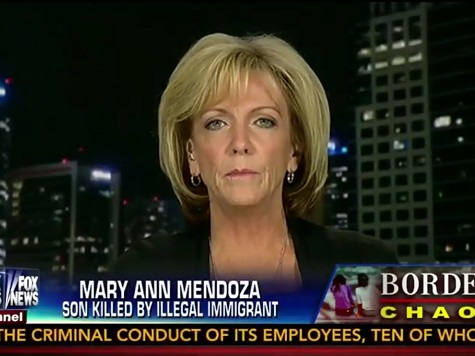 The mother of a police sergeant[3] killed by a drunk driving illegal immigrant has thrown her support behind an open letter to the presidential candidates demanding something be done to help the families of those victimized by individuals in the country illegally.

According to Fox News[4], Mary Ann Mendoza was the mother of an officer named Brandon Mendoza, who was unfortunately killed in a head-on collision with an illegal immigrant sporting a long criminal record who had been in the country without documentation for decades.

Speaking to “Fox & Friends” co-host Ainsley Earhardt, Mendoza lamented, “It’s just a familiar story, over and over,” going on to explain that the open letter from The Remembrance Project[5] called on the GOP candidates to recognize the special circumstances of families affected by illegal immigrant crime.

All victims of crime are left with huge bills, grief, time off from work etc. We can’t cover all of them financially. We just can’t. Mendoza believes that there should be special assistance for victimized families like hers, such as allocated funds for hospital and burial expenses, grief counseling, and support for civil or criminal justice relief. “It’s time for our politicians to stand up for Americans and quit making illegals and Syrian refugees and anybody else who’s trying to cross our borders, quit making them more important than us,” Mendoza proclaimed. With that I agree and if the law is reinstated and the borders secured, that will be the case once more. Unfortunately, this would act as another entitlement… this one doled out if an illegal immigrant commits a crime. Let’s stop the problem the right way so more people don’t die, rather than bankrupting ourselves further.