Bill Clinton is said to have taken[1] 26 or 27 trips on the ‘Lolita Express’ with Jeffrey Epstein. A number of times without the Secret Service in attendance. What does that tell you? I doubt it will bring down Hillary’s campaign… nothing has so far. But it does show just what a sex-crazed piece of garbage Bill Clinton is. You know those trips were not innocent in nature. No way. Fox News has uncovered that Clinton’s trips with the convicted sex offender far outnumbered the original report of 11. “Bill Clinton … associated with a man like Jeffrey Epstein, who everyone in New York, certainly within his inner circles, knew was a pedophile,” Conchita Sarnoff, of the Alliance to Rescue Victims of Trafficking and author of a book on Epstein titled “TrafficKing” said. “Why would a former president associate with a man like that?” Oh, I don’t know… maybe because he is a sex addicted pervert. 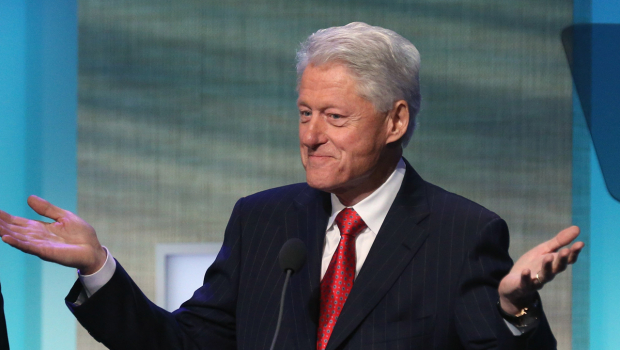 Epstein served 13 months in prison and home confinement for solicitation and procurement of minors for prostitution, Fox News reported[3].

Virginia Roberts, 32, who claims she was pimped out by Epstein at age 15, has previously claimed she saw Clinton at Epstein’s getaway in 2002, but logs do not show Clinton aboard any flights to St. Thomas, the nearest airport capable of accommodating Epstein’s plane. They do show Clinton flying aboard Epstein’s plane to such destinations as Hong Kong, Japan, Singapore, China, Brunei, London, New York, the Azores, Belgium, Norway, Russia and Africa.

Flight logs identified those aboard the jet, where friends of Epstein reportedly had sex in an onboard bed with underage girls. The passengers were listed by their initials or first names, like “Tatiana.” Still think Clinton is ‘clean’ on this one? MSNBC’s Joe Scarborough said what makes Donald Trump particularly dangerous is that he will go after Clinton on his ties to Epstein where other candidates wouldn’t. Uh, no… Donald Trump is on Epstein’s list as well and has visited that notorious getaway, just as Clinton has. Not sure how many times, but he has. So, tell me again how The Donald will go after people like this? Trump says that Epstein is a terrific guy he has known for 15 years. Do tell. Of course, Trump’s attorney claims Trump doesn’t know Epstein well at all… but that’s not what Trump said. Which is it? And Trump is a good friend of Bill Clinton’s. Perverts of a feather.