Did You Notice THIS About the VP Debate Last Night? Your Blood Will BOIL…

This is an old political attack tactic…[1] if you are weaker than your opponent, interrupt them incessantly and keep them off balance. That is what Tim Kaine tried to do last night during the VP debate. He failed miserably. All he did was make himself look desperate and make Pence look stately and competent. Kaine’s arguments were chock full of empty platitudes and Marxist drivel.

While Kaine focused on living through the debate, Pence called him out[2] for flip-flopping on taxpayer funding of abortion. “I appreciate the fact that you’ve supported the Hyde Amendment, which bans the use of taxpayer funding for abortion in the past, but that’s not Hillary Clinton’s view,” Pence told Kaine. That was just one fatal blow delivered by Pence last night and it would not be his last. I’d almost feel sorry for Kaine, but then I remember that he is a stone cold Marxist and has extensive ties to the Muslim Brotherhood. 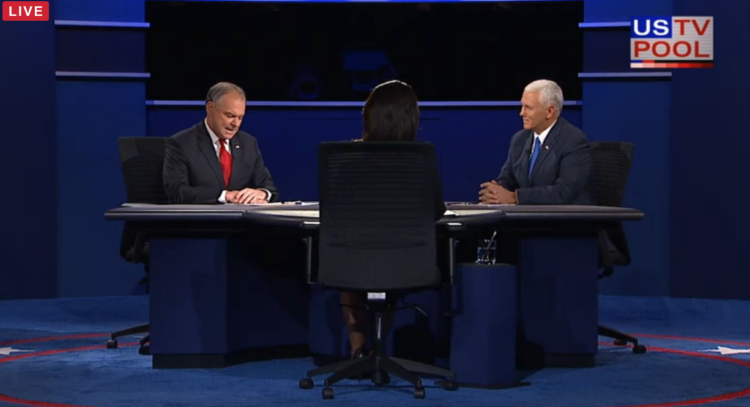 Shortly after the debate ended, the RNC made a quick note of Kaine’s aggressive style in an email to reporters.

The email simply included a pair of tweets from reporters, citing specific voters being turned off by the Democratic vice presidential nominee’s style.

“Undecided voter in Ohio says, ‘Kaine came off like a jerk’ tonight. Adds that he ‘reinforced’ some of the negatives about Clinton,” read one tweet from CNN’s Dan Merica.

In a separate statement, RNC Chairman Reince Priebus described Kaine as having “desperately flailed away with empty platitudes and constant interruptions.”

Throughout Tuesday’s debate, Kaine did repeatedly interject, drawing the attention of many debate watchers on social media.

And outside analysis confirms that Kaine did push harder to interject. Analysis[4] from FiveThirtyEight found that Kaine interrupted over 70 times, compared to just over 40 interruptions for Pence.

The overwhelming sentiment out there is that Mike Pence won the debate. Pence seems like a good guy… although some of his stances really make me squint. He believes that humans contribute to climate change for instance. But on many of his stances, he gets it exactly right. Kaine, not so much…[5] he had the unmitigated nerve to claim that the terrorist threat around the world has decreased. That’s horrendously laughable. Then he tried to portray Clinton as a war hawk. That’s simply ridiculous.

Kaine might want to actually talk about substantive issues next time and act like more of a statesman than a jerk. It’s called a debate for a reason… not a free-for-all. Typical Leftist.