During a campaign rally, Donald Trump — who supposedly just LOVES the military, like so much — pulled off what seems to be a genius publicity stunt. When a veteran had a question for him, instead of answering from the podum, he got off the stage and answered it personally. 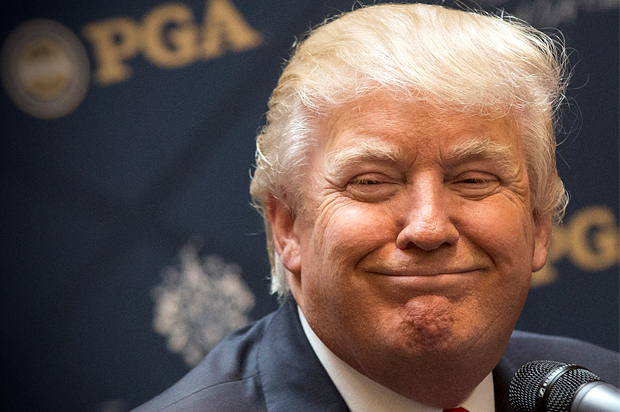 For 21 years, a wounded veteran who served with the 101st Airborne fought for his nation. On Tuesday, in an emotionally charged face-to-face meeting, Donald Trump promised to take this veteran’s side in the ex-soldier’s current battlefield: the Department of Veterans Affairs.

Trump was answering questions at a Sioux City, Iowa, campaign stop when a wounded veteran named Todd was given the opportunity to speak.

“These are our greatest people. The wounded warriors. These are the greatest. The best,” Trump said before leaving his podium to greet the man and his family.

“With the current administration, warrior care is lacking to say the least…especially post-service,” Todd said to Trump, noting that he did not work and his wife, April, was his caregiver. “What will the Trump administration do better than the Obama administration?”

“Is the VA not doing the job?” Trump asked.

April explained that Todd was supposed to enroll in a new VA program, but can’t get an appointment.

Trump acted decisively. He told Todd and his wife to put their information on a card and give it to him so he could champion their cause.

“I am going to put pressure on the VA like you won’t believe,” Trump said to major applause from the crowd. “Let’s see if we can get this.”

… “As president, I can guarantee it. As Trump I can say, ‘I’ll probably be able to pull it off anyway.’” he told the family as the crowd around him cheered. “Because they know it won’t stop. It’ll be easier to take Todd and just say ‘Look, Todd, we’re gonna work with you.”

Trump then discussed the VA’s “terrible” shortcomings. “The waits now are worse than they’ve ever been. Thousands of people dying, waiting for a doctor,” he said.

To fix the situation, Trump said he would allow veterans in need of care to receive treatment at any local hospital, which Trump said would cost less and improve the quality of care.

Yeah, the guy who wanted to avoid the military so much that he was a draft dodger just loves the military, guys. LOVES it. And while it may be nice for him to promise to take care of Todd, all he’s done is publicly say he would where thousands and thousands of people will see it and go, “Aw, that’s so nice! Trump is such a good guy!”, without any knowledge of whether or not he’s actually going to follow through. And regardless of whether or not he does make a phone call or two for this guy — which would be a very nice thing to do — it doesn’t suddenly make him presidential material (he’s not) or explain how, exactly, he’s going to fix the million problems he promises up and down he’s going to fix. It’s another example of Trump the Blowhard giving people exactly what they want to see… the only problem is, it’s just a pretty picture, with no depth or substance underneath.