Your Vote, Your Soul, and the Future of Conservatism

Conservatives who stay true to their values and refuse to sign their names to authoritarian statism (not to mention moral degeneracy) by voting for Trump will face bullying right down to the bitter end. But if Shrillary wins, it won’t be because of NeverTrumpers; it will be because a mob of angry fools stuck us with an outlandishly unacceptable candidate that it is not possible to vote for in good conscience.

Writing at New Americana, Brian Carter sees the NeverTrump dilemma like this:

You are kidnapped, bound, and taken to a dark room. You are sitting in front of a table and there is a man pointing a gun at your head. On the table are two pills, one red and one blue. The red pill is cyanide. The blue pill is arsenic. You are told you must take one of the pills or you will be shot. What do you do? Since you are going to die anyway, take the bullet and frustrate their plans. More importantly, who is morally responsible the death? The AlwaysTrumpers claim the kidnap victim is responsible based on the decision they made to take a pill. No. The kidnappers are responsible, regardless of the decision.

At this point, conservatives unwilling to surrender their values and vote for slime like Trump are not numerous enough to swing an election. Yet the Trump humpers insist we knuckle under. Here’s why:

This isn’t about NeverTrump, this is about their need for validation of their moral choice. The articles are a form of virtue-signaling. However, instead of promoting themselves as virtuous, they want to bring others to their level as justification for their decision. They must destroy anyone who fails to make the same moral choice they made. If they forsook their principles while others around them remained true, what does this say about them?

When intellectual thugs (e.g., Dennis Prager, William Bennett, Roger Simon) rage that holdouts are guilty of “virtue signaling” or “moral narcissism,” they are attempting to stigmatize letting moral values guide your behavior. They are trying to tell you that it is bad to be good.

Let me point out one last time that Trump is not only grotesquely unqualified by temperament, character, and lack of experience. He has been running as a fascist dictator, barking that he will issue unlawful orders to murder the innocent relatives of people he deems to be terrorists, and to inflict torture “a hell of a lot worse than waterboarding,” not for interrogation purposes but because his victims will “deserve it.”

The Right is splitting into those who are willing to vote for such a person and those who are not. If you are not, write in Evan McMullin or Darrell Castle.

This election was lost months ago. Whatever happens, a corrupt, inept, unfit, authoritarian progressive will win. The important thing now is that a counter-progressive resistance movement with moral credibility survives. If we maintain our integrity, we can win future elections — although possibly not as Republicans. 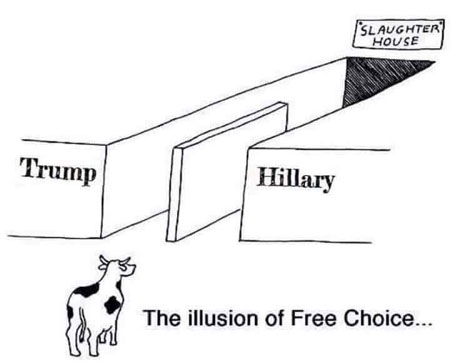