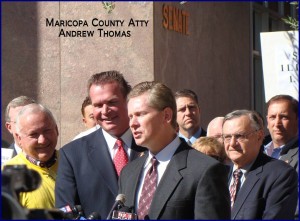 [1]With Arizona’s Governor Jan Brewer term limited, a crowded field of Republicans has emerged hoping to replace her in 2015. The liberal media can’t make up its mind which of the more moderate to liberal candidates it prefers, so those four are all being touted as frontrunners. Various contradictory polls from groups with agendas have been released, with wildly humorous results.

The most conservative candidate in the race, former Maricopa County Attorney Andrew Thomas, : a Harvard Law educated author, has gained the support of the conservative base, tea party and grassroots. While the other four candidates duke it out to split up the more moderate GOP vote (roughly 66 percent) four ways, Thomas is poised to take the base (33 percent) and win the nomination. The Democrats have only put up one candidate, Fred Duval, who is relatively unknown. It is difficult for Democrats to win statewide elections in Arizona; Janet Napolitano was a rare exception. Only through bogus election complaints against her GOP opponent, Matt Salmon, a whisper campaign about how his Mormonism was sexist (one in five GOP women voted for her based on this), and getting Sheriff Arpaio to run TV ads about her, was she able to win by a half a percent.

The conservative base is rallying around Thomas because he has the most consistent, proven and proactive record by far. Two of the most contentious issues in Arizona currently are Common Core and Governor Brewer’s expansion[2] of Obamacare Medicaid. Thomas has been the only candidate to loudly and consistently stand up against both of these. Illegal immigration also continues to be a problem, as Border Patrol agents report that more illegal immigrants than ever are now coming over the border, threatening to make the financial drain on Arizona as bad as it is in California. Last month, the Obama administration started transporting[3] illegal immigrant women and children to Arizona and dropping them off, in retaliation over Arizona’s SB 1070. Federal judges have gutted the most potent provisions of SB 1070 since it was passed, rendering it mostly ineffective.

Thomas has the support of the powerful former chair of the Maricopa County Republican Party, Rob Haney, who personally traveled around the state collecting signatures and $5 matching contributions for Thomas. The Maricopa County Republican Committee’s leadership team, the Executive Guidance Committee, took a poll[4] earlier this month of the governor’s race. Thomas received more than twice as many votes as any other candidate. This is significant, because unlike other polls in the race, it surveyed “likely likely” voters, not the typical “likely voters,” which doesn’t give enough weight to the conservative base that is more likely to show up and vote than other Republicans.

The political chattering class and elites think Thomas can’t get elected, due to a politically motivated witch hunt[5] by powerful leftists angry about his proactive efforts on crime related to illegal immigration. These leftists were able to get the far left-controlled Arizona State Bar to disbar Thomas, during a time when I was working for him. However, many attorneys have been disbarred and gone on to become quite successful. Bill Clinton is the most prominent example, remaining one of the most popular politicians in the world, and now averaging $195,000 per speech. The actions leading to his disbarment were far more sleazy than what Thomas was accused of – and Thomas wasn’t guilty. As a result of what happened to him and could happen to anyone the left disagrees with, Thomas has vowed to take on government corruption at the highest levels of government, including within the judiciary and State Bar, something none of the rest of the GOP candidates dare risk. A phrase commonly heard around[6] Maricopa County as a result is, “Cook County is no longer the most crooked county in the nation.”

The other candidates include Doug Ducey, who has been plagued by complaints[7] from franchise owners while he was CEO of Coldstone Creamery. Many SBA loans went bad due to the failure of numerous franchises. In a gubernatorial debate last week, Ducey railed against “Deadbeat Dads,” to the shock of many who have a brother or son[8] struggling to keep up with onerous child support laws. He was silent when Governor Brewer expanded Obamacare Medicaid, and during last week’s debate, it was still unclear whether he agreed with it.

Secretary of State Ken Bennett is another one of the so-called front runners, but no one has seen or heard much of him. Mesa Mayor Scott Smith is perhaps the most moderate Republican in the race, admitting he supports Common Core and a path to citizenship for illegal immigrants. Christine Jones, the only woman in the race, is a virtually unknown attorney with ties to McCain, not helpful in an Arizona GOP primary. There is also a sixth candidate, Frank Riggs, who has been unable to get any traction in any poll.

The polling done in the race so far has been all over the board. A poll[9] taken in February by Public Policy Polling, a very liberal firm, put Bennett at 20 percent, Thomas at 9 percent, and Ducey at 6 percent. Contrast this to a June poll[10] by McLaughlin and Associates, which has ties to Ducey, putting him in the lead at 22.8 percent and Bennett with only 8 percent.

The liberal media is so furious Thomas has a chance, they are pulling out all stops to defeat him. The Phoenix New Times ran a story last week begging[11] people to vote for any of the other GOP candidates over Thomas. The normally fair and balanced Arizona Capitol Times referred to Thomas as “disgraced[12]” in a headline. Thomas is not a “disgrace” to stand for the principles he has and will fight for. He’s a hero! The Arizona Republic tried hard to make it appear[13] that Thomas had not collected enough money for campaign financing and would be dropping out of the race, even though Thomas immediately fixed the problem within a few days.

Fortunately, Arizona Republicans have a long history of not caring who the newspaper and the rest of the media urge them to pick as the nominee. This is even more pronounced due to the declining influence of the local Arizona press, which continues to shrink and go out of business, replaced by conservative blogs and alternative media.

Red states like Arizona are getting redder, and blue states are getting bluer. After Governor Brewer’s betrayal on Obamacare, Common Core and sales tax increases, Republicans are not going to settle for another compromiser. As someone said who was listening to the governor’s debate last week, “Andrew Thomas sounds like Ronald Reagan, the other candidates just put me to sleep.”