Liberal Democrat Maxine Waters is practically a California institution. The almost 80 year-old politician has been serving since 1991, enacting more and more liberal policies in California, and it seems that there has never been a challenger capable of taking her down. But is that about to change[1]? 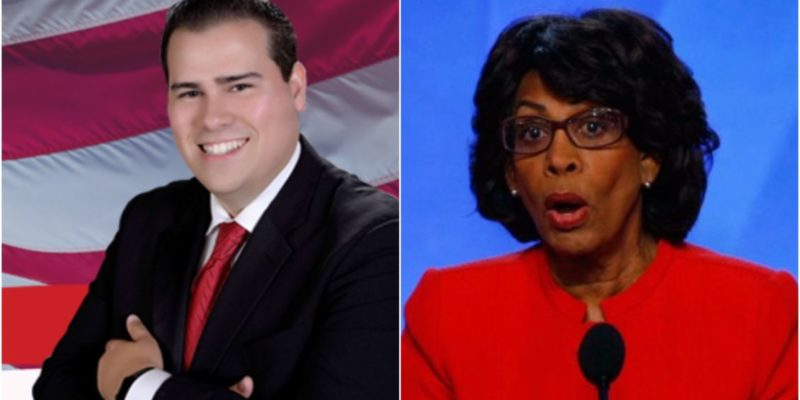 Newcomer Omar Navarro is a conservative Latino politician and he’s officially looking to send Waters packing once and for all. The 28 year-old rising star said that he’s had “enough” of seeing Waters and her liberal agenda destroy his state and he’s hoping to take her seat in the 43rd Congressional District in the 2018 elections.

“When I realized Maxine Waters was my representative, I said, ‘Wow, this person is representing me? How are people electing this person year after year?’” Navarro said in an interview with Breitbart. “I started doing research and looking into her background and I did not see one candidate running a legitimate campaign against her in 27 years.”

He added that he is tired of “liberal politicians that are running their own districts, their own counties down to the ground. Enough is enough,” and that he wants to run in 2018 because “We have to do something about it and I’m not going to let our country fall apart.”

The 43rd District, where Navarro is running, includes parts of South Central L.A., Westchester, Playa Del Rey, Torrance, Gardena, Hawthorne, Inglewood and Lawndale. He was born in Inglewood and raised in Hawthorne and Torrance, which he says gives him an edge — because he knows the district and its people. He previously served on the traffic commission in Torrance.

Navarro previously ran against Waters in 2016, but only raised about $3,000 for his election. Waters was able to raise $650,000, which she spent to keep her seat. “But I still got 25 percent of the vote, which was quite humbling to even receive that type of vote with the amount of money I spent,” he said. “I learned a lot from that election.”

Do you support Omar Navarro?