Last night was the final presidential debate before the election and all eyes were on Donald Trump. What kind of performance would Trump turn in? Would he crash and burn again, or would he give Hillary a run for her money? This was his last chance to convince voters across America to choose him. Did he pull it off?

According to a focus group of undecided voters[1], yes. 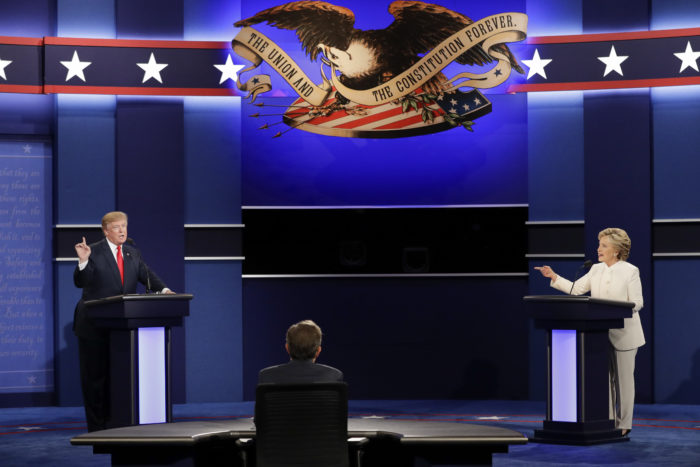 Pollster Frank Lutz had a focus group of 26 Nevada voters monitor the debate. All had not yet chosen who they were going to vote for. And after the debate was over, the winner from the Luntz focus group was surprising to a lot of people: Donald Trump.

Pick your winner in my online focus group: https://t.co/XHI6eGQcLs[4]

According to Luntz, the focus group described Trump as having “improved”, although they still described him as “rude”. With Hillary, there was a greater distinction. One participant described her as “presidential”, while another described her as a “criminal actress”.

When it comes to economics, even the focus group members leaning towards Hillary found Trump’s business experience more trustworthy:

They also trusted Trump more when it comes to foreign policy:

When Trump focuses on the failures and absurdities of Clinton/Obama foreign policy, even Hillary-leaners give him solid scores. #DebateNight[6] pic.twitter.com/FtHlhCwktv[9]

When Trump hit Hillary for losing $6 million in funds as Secretary of State, that scored a big with the focus group:

"If he spent the whole election doing this, he'd have it wrapped up" pic.twitter.com/LIBDwr7PPO[11]

But the biggest winner for Trump when it came to the issues was immigration, hands down:

Who won on immigration?

Of course, these are only the results from the one focus group; whether or not they will bear out on a national scale is yet to be seen. So far, he is still trailing in most polls and it’s expected that he will take a brutal loss on November 8th.

But then, maybe the focus group shows that undecided voters may yet still be won over. There are still a few weeks to go — anything could happen.