Former NFL Linebacker to Blacks: ‘We Have to Do Better’ Than Obama

Garry Cobb is running for Congress to represent New Jersey’s 1st District, but this local race is gaining national attention due in part to Cobb’s willingness to speak candidly on the issues. Cobb is passionate about discussing the effects of Democrat policies, which he says have been disastrous for the economy, families, youth and the black community.

During an interview with Steve Malzbergwith on NewsMax TV[1], the former NFL linebacker made it clear that he does not support the direction president Obama has taken the country:

“African American communities throughout the country are doing horribly under Democratic-run cities and that’s why I want to put an end to it.”

“We celebrate the fact that [Obama] became president … but he hasn’t really done anything for the African American community during that time.”

While many political-hopefuls are quick to level criticism of policies affecting their communities, few have actually spent time working and making a difference as individual citizens in the lives of those they claim to care so deeply about. Cobb stands out in this regard; he has been working for 20 years to make a difference in the lives of young people in Camden, which is one of southern New Jersey’s most impoverished areas. 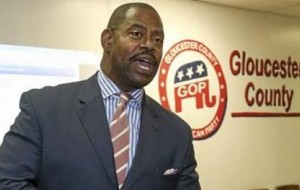 [2]
Cobb has a compelling personal story himself. He told NewsMax TV that he grew up poor but as a result of a strong family with both parents in the home, he was able to be successful.

“We started out poor…. As a kid I could remember eating mayonnaise sandwiches, ketchup sandwiches and drinking sugar water, but we were able to go out and do better than our parents and that’s what my parents dreamed of,”

Cobb is running against Donald Norcross, a very powerful Democrat power broker’s brother and a sitting state senator. And while Cobb has an uphill battle ahead of him, the Democrats have taken notice of the potential for an upset. Just last week Senate Majority Leader Harry Reid traveled to southern New Jersey to attended a fundraiser for Cobb’s opponent[3].