Misleading “Freedom” Referendum Goes Down in Flames in Scotland 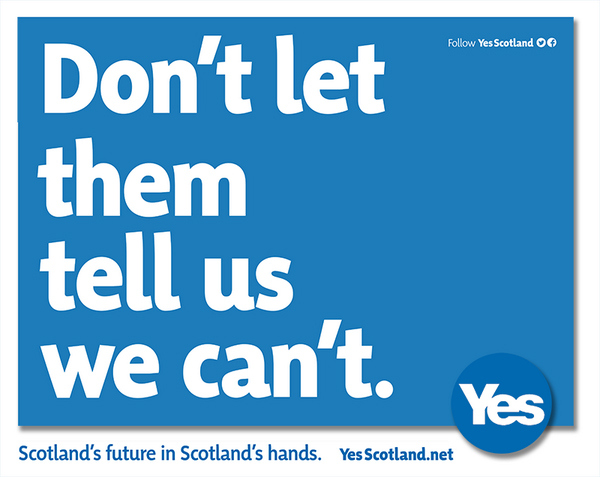 [1]
It is a good thing the Scots voted against independence from England. The movement was not about freedom, but about increasing socialism. Both the UK Socialist and Green Parties, along with other left-wing parties, supported the referendum; the Conservative Party (Tories) and right wing UKIP opposed it. Here is an analogy that makes it easy to understand: if California secedes from the U.S. to become a communist state, is it really about freedom and independence?

What has been disturbing about the movement is a lack of informed analysis. Most supporters vaguely claimed it was about independence and freedom, but didn’t get into specifics. There have been plenty of cliches and colorful flags, but little substance. “Yes Scotland” and “Better Together,” the names of the two competing sides, were frequently bandied about with little more.

Reading deeper into the referendum, it becomes clear that proponents wanted to leave the UK in order to implement more socialism than currently exists there. One of the biggest reasons was so Scotland could keep its vast oil reserves all to itself – 90 percent of UK oil reserves are located in Scotland – and use the money to pay for even larger government welfare programs. Another reason was to ditch the current austerity measures being imposed across the UK as a result of too much government spending, and avoid the privatization of government functions. Additionally, proponents want to spend more money on childcare, which they propose[2] to fund by putting 100,000 more women in the workforce, who will then pay more taxes. A final key reason for leaving the UK is to eliminate nuclear weapons. A Trident nuclear missile base is located in Scotland, and seceding would force it to relocate – of course many jobs would go with it.

Scotland is more left wing than the rest of the UK. Its two dominant parties are both on the left; the Scottish Labor Party and the Scottish National Party (SNP). Scotland has only elected one Conservative to Parliament since 2001, out of 59 Scottish seats. The recent surge of the SNP in 2011 led to the referendum. The Scottish left is irritated at being governed nationally by the Conservative Party in recent years.

Tellingly, one Scot tweeted on the night of the referendum, “If we go independent, we will no longer have to go to war for American interests and do things the Tory way!” Scotland’s First Minister Alex Salmond, who headed the independence effort, declared[3], ‘‘A Yes means Scotland’s future in the hands of people who live here – so no more Tory governments we didn’t vote for.’’

The pro-referendum side outspent[4] the opposition by more than two to one, but it was defeated 55 percent to 45 percent, with a whopping 85 percent turnout. In contrast, only 50 percent of Scots voted in the last Scottish Parliament elections, and 63 percent in the last UK election. The areas with the highest turnout voted the strongest against the referendum.

This is evidence the Scots aren’t quite as left as its leaders are. Less than half of Scots oppose nuclear weapons. Support for independence has been decreasing since 2007. The liberal Boston Globe admitted[5] the shakiness of the referendum, “The educated and middle-class Scots trended toward keeping the union, while the poorer, working-class Scots, who saw heavy industry collapse take their jobs away, tended to prefer a role of the dice to see if their condition might not be made better by going it alone.”

Some are comparing[6] the Scottish independence movement to separatist movements in Quebec, Northern Ireland, Catalonia, Ukrainian nationalists, and others. But support for Quebec’s withdrawal from Canada has also been decreasing over the years. Like the Scottish independence movement, the Quebec separatist movement also calls for an even more left-wing platform than the existing regime. For example, on its website, the French Canadian party declares[7], “The Parti Québécois had the courage to take up the issue of religious accommodation and secularism, neglected for so long by the Liberal Party of Quebec.” Another area is free legal aid, “The Parti Québécois has made a historic rise in eligibility thresholds for legal aid on or after 1 January 2014 – This increase will provide free coverage for elderly people living alone and mostly benefiting from GIS.”

Similarly, the largest party in Northern Ireland that wants to leave the UK, Sinn Fein, states[8] on its website, “We propose the establishment of a universal public health system that provides care free at the point of delivery, and the development of an education system that is accessible to all and responsive to the needs of those it serves. Sinn Féin opposes any and all proposals to further privatise our public services.” This is evidence that perhaps independence in these regions will not work unless it involves real freedom, not increasing socialism.

The other UK parties pledged to give Scotland more control over policy, borrowing and taxation should the referendum fail. A move like this only serves to let Scotland behave recklessly with spending, similarly to how Detroit, Chicago, Washington, D.C., and parts of California are fiscally irresponsible within the U.S. Scotland already spends more per capita than England. Unlike England, it completely subsidizes the healthcare costs of college tuition, prescriptions and elderly care. The rest of the UK will ultimately end up bailing Scotland out, just like taxpayers in the U.S. are getting stuck with the bill for the irresponsible, Democratic-controlled parts of the country.

For this reason, many cynically hoped the referendum would pass, to let Scotland fully suffer the effects of its left-wing government. Regardless, gradually giving Scotland more autonomy – known as devolution – may very well lead to separation down the road, what UK Conservatives refer to as a “slippery slope.” By then, England may be tired of bailing out its socialist stepchild. Additionally, by giving Scotland more local control, it is akin to federalism, something the U.S. recognizes is better than big government. Of course, secession would have the beneficial effect[9] of allowing England to become more conservative.

The population of Scotland is a little over five million people – less than the population of Arizona, which is over six million. If it becomes a tiny country without weapons to protect itself, located in such a strategic position, it will be venturing down a very risky path with terrorists and Putin on the prowl. This isn’t “Braveheart,” and it is doubtful this is what William Wallace had in mind when he tried to free Scotland from King Edward “Longshanks.”