Followed quickly by lawsuits, because liberal groups are so racist that they think minorities, particularly Blacks, are incapable of getting an official state or other approved ID. 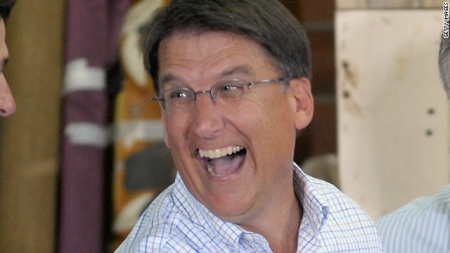 (Raleigh N&O[2]) Gov. Pat McCrory on Monday signed into law a bill requiring voters to produce a photo ID when they go to the polls, and it was immediately met with legal challenges in federal court questioning its constitutionality.

“North Carolinians overwhelmingly support a common-sense law that requires voters to present photo identification in order to cast a ballot,” McCrory said in a statement. “I am proud to sign this legislation into law. Common practices like boarding an airplane and purchasing Sudafed require photo ID, and we should expect nothing less for the protection of our right to vote.”

How dare North Carolina pass a voter ID law. No other state does this, so, apparently NC should be sued

North Carolina becomes one of 34 states with some form of voter ID law. The voter ID provision goes into effect for the 2016 election.

Oh. Well, at least it’s a good thing that the home states[3] of Mr. Obama and Joe Biden do not have voter ID laws.

“With one stroke of the pen, McCrory has effectively reversed 30 years of progress and reinstated practices similar to the discriminatory ‘Southern Strategy’ adopted by the Republican Party in the ’60s and ’70s,” said Butterfield, a former N.C. Supreme Court justice. “Without question, today is a shameful day for Republicans in North Carolina.”

That’s GK Butterfield, Democrat-NC, who fails to note that it was Democrats who ran the state at the time, and were the ones pushing racist policies. He also wants Eric Holder’s politicized DOJ to interfere.

I know you’re wondering just where the constitutional comes in to play. The N&O article missed it, so let’s go to

(WRAL[4]) Lawyers for a 92-year-old African-American woman, along with multiple civil rights groups, filed one of two lawsuits Monday that challenge the state’s sweeping elections changes just hours after Gov. Pat McCrory signed them into law.

That suit, filed by the state chapter of the NAACP and the Advancement Project,[5] alleges that Rosanell Eaton’s constitutional right to vote is threatened by the new law, which requires voters to show photo identification[6] when they go to the polls, starting in 2016.

Hair said Eaton was one of the first African Americans to vote in North Carolina and has continued casting ballots for 70 years, but the new law’s photo ID requirement would disqualify her from future elections because the name on her birth certificate doesn’t match the name on her driver’s license.

So, she has a driver’s license? Then, per the text of the law, she’s able to vote.

The other lawsuit, filed by the American Civil Liberties Union, the ACLU of North Carolina Legal Foundation and the Southern Coalition for Social Justice,[7] tackles provisions of the law that cut a full week from the early voting period, eliminate same-day voter registration and prohibit “out-of-precinct” voting.

The legislative body makes the laws. There are no Constitutional requirements for any early voting, same day registration, or out of precinct voting, but there is this

(Article I, Section 4) The Times, Places and Manner of holding Elections for Senators and Representatives, shall be prescribed in each State by the Legislature thereof; but the Congress may at any time by Law make or alter such Regulations, except as to the Places of chusing Senators.

The NC law is within those made by Congress.