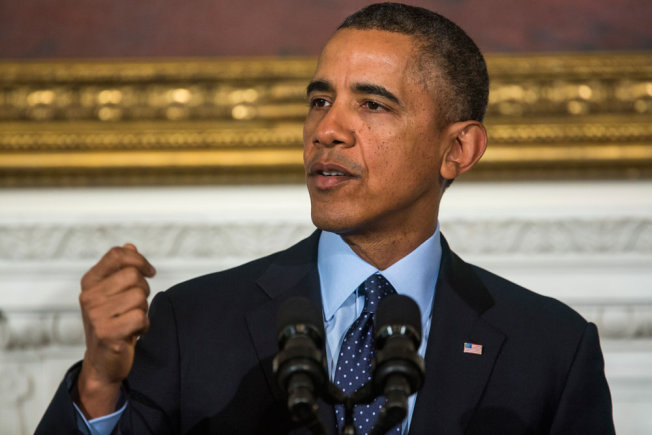 US News[2]: President Barack Obama speaks to the National Governors Association in the State Dining Room of the White House on Feb. 24, 2014, in Washington, D.C.

Threats and intimidation have become the hallmark traits of America’s first dictator – our lawless President. This week, Obama held a meeting with governors from across the country. He was there to play Marxist hardball and to make it clear he did not trust the governors – especially GOP governors.

To say I am disappointed in Governor Mary Fallin of Oklahoma, who also chairs the NGA, is to make a major understatement. Disappointed, but not surprised. Her weak, watered down criticism of Obama left much to be desired. She needs to be replaced in Oklahoma by a steel-spined Constitutional conservative and a move is afoot in the state to do just that. Here’s to it succeeding. I have no patience for a conservative who wants to please the Progressives. Fallin treads very close to being one herself.

The meeting itself was a non-stop slap down by Obama refusing anything the GOP leaders offered. He set a much more aggressive tone, indicating that he had the power and could do whatever the hell he pleased. The chilling veiled threats were the norm for Obama – just ask Rick Perry and Nikki Haley[3]:

At one point during the morning meeting at the White House, the president even warned Republicans he would strike back if they complained about potential cuts to the National Guard.

“He said, ‘If I hear any of you pushing back, making statements about Washington spends too much money, you will hear from me.,’” recalled Texas Gov. Rick Perry during a news conference at the Chamber of Commerce following the meeting. “I don’t mind telling you I was a bit troubled today by the tone of the president.”

”He basically said, ‘Many people in this room have asked for cuts. Now you’re getting them,’” said South Carolina Gov. Nikki Haley. “He said, ‘If somebody questions it, I’m going to have to say something about it. It chilled the room quite a bit.”

I’ll bet it did. While some states are attempting to militarize the National Guard which is unconstitutional and not acceptable, the National Guard has its place. It is meant to serve in times of need and emergency, as well as “to execute the Laws of the Union, suppress insurrections and repel invasion.” (Article I, Section 8, Clause 15) If you cut funding to the States’ National Guard forces, they become much weaker and it will be harder to protect the individual states. Something that I personally believe Obama totally intended to do for numerous reasons and to fulfill an agenda of weakening the US militarily and security wise. He has gutted our overall military back to pre-WWII levels already and is now digging in further. When you consider the population back then was half of what it is today, you’ve brought the US to a new all-time low in military protection forces. Americans should be getting very, very nervous over this. It portends very bad things to come.

Employing typical Progressive propaganda, the meeting was portrayed as a summit to grease the wheels for partnerships with the states. Governors were told that Obama would address issues that have gridlocked Congress and work towards mutual solutions. Utter Marxist, lying crap which meant exactly the opposite of what was said. Obama had no intention of working with them. He was there to put the Governors in their place and to tell them to toe the line or face the consequences and his wrath. The Republicans walked away feeling sullied and used, which they were. A few had the backbone to let loose on Obama. Political conflict doesn’t strengthen politicians; it reveals them[4]:

“The Obama economy is the minimum wage economy. It’s increasingly evident this White House is waving the white flag of surrender when it comes to growth and opportunity,” said Louisiana Gov. Bobby Jindal, who led the delegation of GOP governors to the White House as vice chair of the Republican Governors Association. Jindal’s white-hot rhetoric just moments after exiting the West Wing could also be interpreted as an indication of his own presidential ambitions in 2016.

Haley, who faces a re-election campaign this year, said she is “more convinced now than ever [Obama] truly believes that government is the answer to creating jobs.”

In addition to her concerns about the Guard, she also said she was disappointed in Obama’s intransigence on higher education, recounting an exchange initiated by Jindal regarding school accreditation.

“And [Obama] actually said, ‘I can’t have a bunch of states going out there and accrediting schools and having all these bad schools out there,’” Haley said. “He just doesn’t understand that if you give us the ability, we can put good policy in place. He doesn’t believe that. He believes D.C. is the one to do that.”

But perhaps no issue irked the governors more than discussion surrounding the Pentagon’s plan to reduce the size of the Army as part of an across-the-board cut in defense.

“Democrat governors are very concerned, I would suggest to you, about what they heard today about the Guard,” said Perry, who is not running for re-election in Texas this year but has left open the possibility of another White House run.

The Democratic Progressives of course backed Dear Leader 100%. They goose stepped right in line, currying favor and kissing the foot of their leader. Slinking after Obama like a bunch of sycophants in Obama’s court, the name calling began. Colorado Gov. John Hickenlooper dubbed Jindal “a cheap shot artist.” Really Governor? Is that the best you’ve got? Probably couldn’t rouse enough brain cells to be clever now that Marijuana is the drug du jour of Colorado. Connecticut Gov. Dan Malloy got his two cents in on Jindal immediately after he spoke to reporters, calling his remarks on Obama waving a white flag “the most insane statement I’ve ever heard.” Au contraire sir… you are nothing more than a French bureaucrat who deliberately screams that the other side is insane. I mean, for Pete’s sake… Connecticut? You are the asshats trying to enforce gun registration and criminalize the Second Amendment. You sir, already live in a padded room obviously.

Nothing but threats and ratcheted animosity came out of that meeting. While Perry seems to think the Keystone Pipeline will be approved, Jindal is correct… it won’t be. It is a faux carrot held out to make Obama look moderate, but notice how it never quite materializes. One good thing did come about from this meeting though. The partisan gloves came off and the mask was ripped off concerning any real effort on Obama’s part to work with the states. He intends to rule with a federal fist, forcing the states into compliance. He may be in for a real shocker on that count. As Obama threatens conservative US governors, he’s getting ready to get tough with the individual states. It’s long past time that the states and Americans fought back.