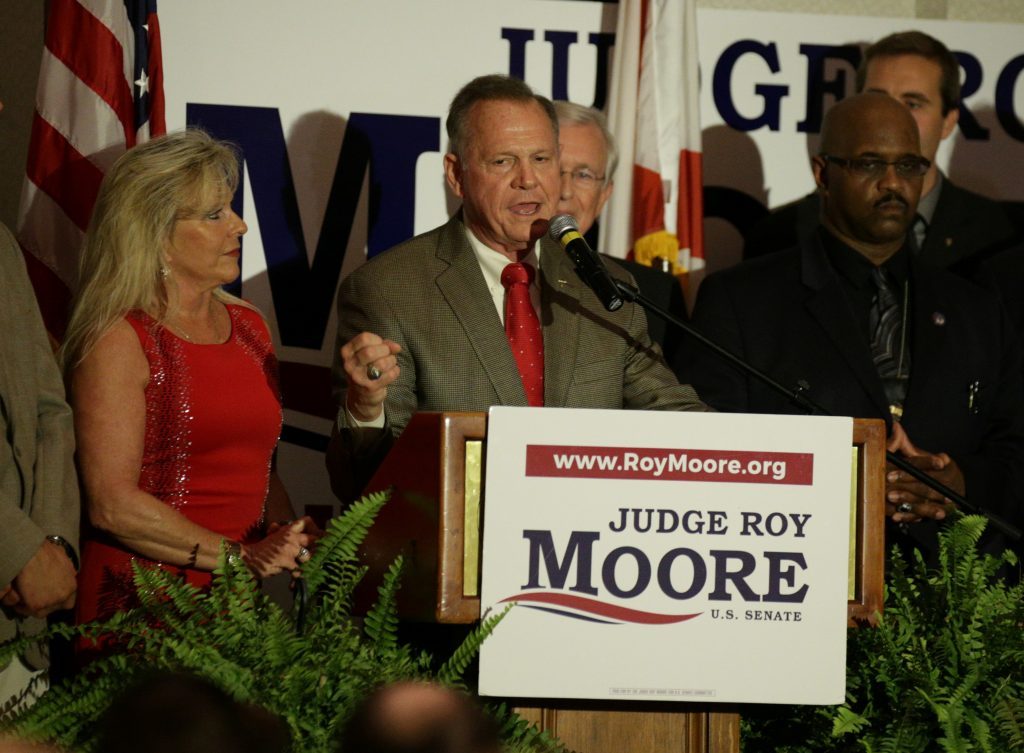 “We are proud to have fought alongside President Trump and the NRA,” said Roy Moore in his victory speech last night. His defeat of Luther Strange in the primary race to become the Republican’s candidate for the Senate seat left open by Jeff Sessions has been national news, with the left-wing press trying their darnedest to turn it into an anti-Trump narrative and the rest of us just wondering why the Alabamans are doing such a good job of being respectful to all involved.

“Together, we can make America great… don’t let anybody in the press think that because [Trump] supported my opponent that I do not support him.”

Projection: Roy Moore wins the #ALSen[2] R runoff. Will go on to face Doug Jones (D) in the general election.

Trump had backed Luther Strange while his ex-White House coach Steve Bannon headed up the campaign for Roy Moore. Last night, Bannon declared the win to be the start of a revolution for insurgent Republicans in the lead-up to the 2018 senate races.

The opinion on the outcome of the race by lefties and Republicans, who are still purple with anger that Trump won the primary, are essentially the same. They already had their hit-pieces ready to go:

Local Alabamans like John Archibald with Alabama Dot Com stressed that it’s not a referendum on Trump, but it’s just “Alabama. Being Alabama,” saying that eight out of 10 Republicans in the state still support Trump. The reason that Roy is popular there is the same reason that Trump is popular — both are “renegade, anti-status quo, wild-eyed wild card.” Even Steve Bannon said that, “A vote for Moore is a vote for Trump.”

A few days ago, Trump himself called into the popular radio show “Rick and Bubba” before he was scheduled to appear at a Huntsville rally supporting Luther Strange, where he expressed that Strange would be a great Senator who loves his state and country.

“Ray will have a hard time. If Luther wins, the Democrats will hardly fight. If Ray wins [the Democrats] will pour [$30 million into the senate race].”

Host Rick Burgess had the unique change to correct Trump by saying that it’s Roy Moore, not Ray Moore and Trump switched to calling him by his correct name, saying that “I don’t know that much about Roy Moore.”

I’m sure Trump has the full intention to work with Roy. During the primaries he attacked every one of his opponents and now not only gets along with guys like Ted Cruz, but he has entrusted the entire HUD portfolio to Dr. Ben Carson. Trump doesn’t hold grudges as long as both sides are willing to work for their electorate instead of themselves. Incidentally, Dr. Ben Carson endorsed Roy Moore[5], too.

Here’s the ten-minute victory speech by Roy Moore, as introduced by Steve Bannon, who every day looks more and more like an exhausted film director.