This is a surprise. Former Arizona Sheriff Joe Arpaio, 85, is running for U.S. Senate to take Jeff Flake’s seat. I love Arpaio, but he’s really too long in the tooth for this now. But who knows? He’s an immigration hardliner and a supporter of President Trump. Both are popular in Arizona. But for some reason, Arizona keeps electing RINOs into office. It’s depressing and has been that way there for many years. Arpaio announced this morning his intention to run. “I have a lot to offer. I’m a big supporter of President Trump,” Arpaio told the Washington Examiner in a phone interview. In another interview with Talking Points Memo, Arpaio reportedly said that he had not discussed this with Trump or anyone in the White House.

This will definitely set fire to the 2018 midterm elections. Senate Majority Leader Mitch McConnell is pushing establishment Republicans for office. Arpaio is certainly not one of those. The Republicans have a razor-thin margin of 51 to 49 in the Senate, after Democrat Doug Jones last month triumphed over Republican Roy Moore in traditionally deep-red Alabama. I blame that race on Mitch McConnell and he could screw up Arizona too. Along with a number of other races. 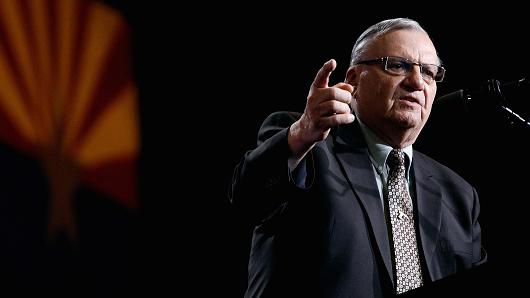 President Trump just recently pardoned Arpaio in August after he was convicted of contempt of court over his practice of racially profiling Latinos. Okay, that’s the politically correct speech for that. Let’s say it a different way. He was looking for illegal immigrants and prosecuting and deporting them and for that, the left tried to nail him legally.

Pro-Trump Republican Kelli Ward is already running for the seat and mainstream Rep. Martha McSally is expected to enter the race. Although, I like Arpaio, I think another Republican should take this one. It’s time for Sheriff Joe to retire. Arizona’s Secretary of State’s office said the state doesn’t hold runoff elections in case a primary winner ends up with less than 50 percent of the vote. “Conceivably we could have a dozen candidates in a special primary election. Who knows, maybe somebody with less than 20 percent of the vote will get elected,” spokesman Matt Roberts told CNBC. What a circus. The Arizona primary is slated for Aug. 28.

I am running for the U.S. Senate from the Great State of Arizona, for one unwavering reason: to support the agenda and policies of President Donald Trump in his mission to Make America Great Again. https://t.co/ANppBdDOtp[2]

It has been more than two decades since Arizona had a U.S. senator from the Democratic Party. Let’s pray that does not happen this time. The Democratic field in the race for Flake’s seat includes Rep. Kyrsten Sinema – although not running on the communist ticket, she is definitely of the ‘red’ persuasion. Trump only beat Hillz by four points in Arizona. Don’t screw this up guys… Arizona is way too important to get this one wrong like you did Alabama.