I still think there is an excellent chance that Elizabeth Warren will run[1]. And these polls give her good odds so far. But the Hildebeast won’t go quietly… she’ll scratch and claw the whole way. She feels it’s her turn and she is entitled. Both are stone-cold Marxists and would finish us off nicely as a Republic. Warren, judging on her performance at the last Democratic Convention, is a raving psychotic. Hillary is one as well. I can’t believe either would ever be President… but hey, I didn’t think Obama would be elected – twice. 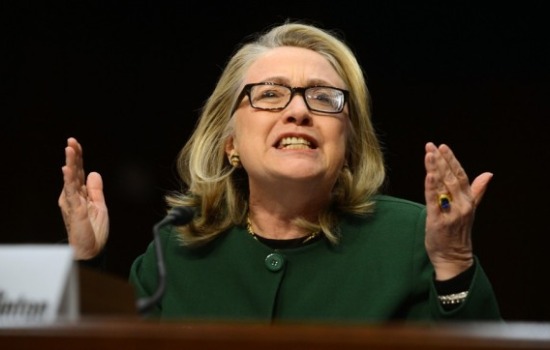 In 2008, it was assumed that Hillary Clinton, who has more dirty laundry than the nation’s dry cleaning businesses combined, and more baggage than Safeway, would be the Democrat nominee for president. Then, out of nowhere, came a one-term senator named Barack Obama who knocked her off her perch.

Hillary was highly vulnerable then, and is even more vulnerable now after her part in the Benghazi terrorist attacks, as a new poll data indicating that another Marxist one-term senator, Elizabeth Warren (Commie-Mass.) is leading Clinton in two crucial primary states, Iowa and New Hampshire, even though Warren has publicly stated that she will not run for the presidency in 2016.

As the Washington Examiner[3] reported on Wednesday, a new YouGov[4] poll indicated that Warren led Clinton in Iowa by a 31-24 percent margin, while in New Hampshire, Warren leads 30 percent to 27 percent.

The poll was commissioned by Communist front group MoveOn.org[5], which has received funding from anti-American international socialist George Soros, who might be pumping Warren to either push fellow Marxist Hillary Clinton even further to the left, to the degree that’s humanly possible, or to dupe Democrat voters into thinking that Hillary is the “moderate” candidate.

It’s early days yet in the race, so anything could happen here. Obviously, the media is not going to bring Hillary’s real track record out for spring cleaning. Way too dirty and crusty with blood for that. What this does indicate to me is that George Soros may be choosing Warren over Clinton. That evil old spider is very determined to take down our Republic and he will select the next candidate carefully. Warren may be his evil candidate of choice – she certainly has all the qualifications: no soul, no morals, no ethics and a killer instinct. I wouldn’t underestimate Comrade Warren.