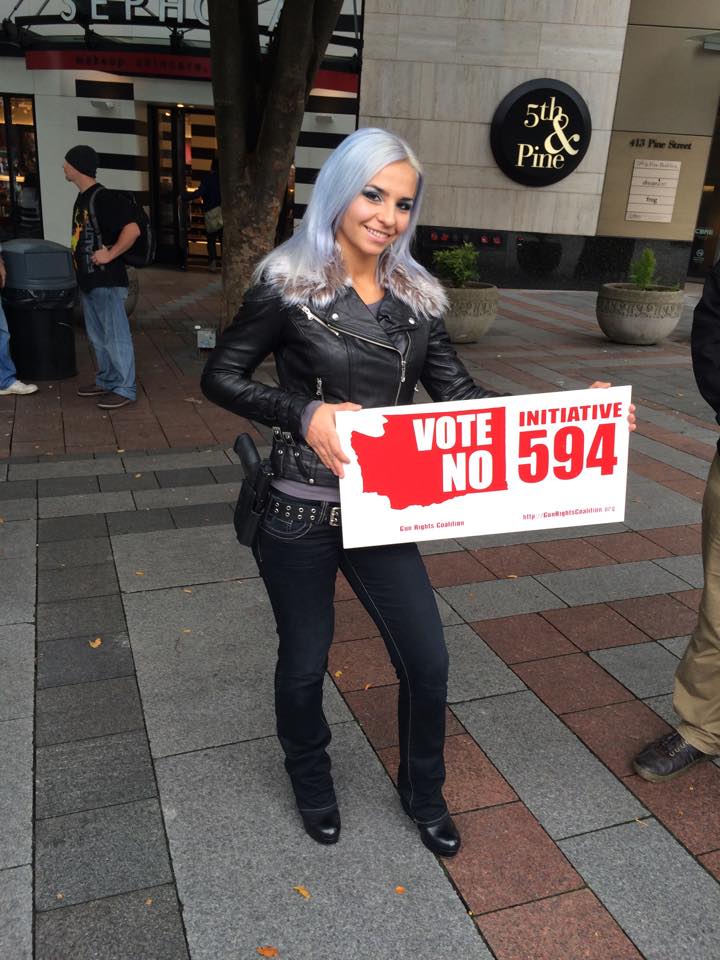 [1]Washington state’s I-594 has massive money pouring into it, because it’s apparently the only gun-control measure on the ballot this fall anywhere across the country. There are actually two duelling gun measures in the state. The first one, I-594[2], the Washington Universal Background Checks for Gun Purchases Initiative, is being bankrolled by billionaires on the left in favor of gun control, including anti-gun activist and former New York City mayor Michael Bloomberg, as well as former wealthy Microsoft execs Bill Gates and Steve Ballmer. Thanks to them, the Washington Alliance for Gun Responsibility has raised[3] nearly $9 million for the initiative this far, massively outspending the other side, which has raised only $1.3 million.

I-594 has been cleverly drafted to sound like it merely makes small changes to gun laws, not a flat-out ban or gun registration scheme. This is why it is so dangerous. People are less likely to oppose it; in fact, polls show that even a majority of gun owners – 54 percent of the 35 percent of Washington residents who own a gun – are in favor of it.

The reality is, the bizarrely-long 18 ½ page initiative is so confusingly and vaguely worded[4] – with many terms and phrases left undefined – that former Washington State Supreme Court Justice Richard Sanders warned protesters at a rally against I-594 how impossible it will be to comply with. Gun owners will easily make honest mistakes, making it easy to prosecute them. Many will just give up trying to own a gun.

State Rep. Jason Overstreet (R-Lynden) hinted to those attending the protest that the initiative had been written vaguely and confusingly on purpose. If passed, it will be subject to the state department of licensing – unelected government bureaucrats – to draft rules interpreting and defining it later (as oppressively as they’d like). Alan Gottlieb, who founded the Second Amendment Foundation and chairs the Citizens Committee for the Right to Keep and Bear Arms, compares[5] it to Rep. Nancy Pelosi’s attitude about Obamacare, “pass it so you can find out what’s in it.”

I-594 is an unfunded mandate that would prevent gun owners from transferring – or even loaning – their guns to a family member (unless a gift), private party, friend or anyone else. Instead, all transfers would be required to go through a dealer for a background check. Gun ranges would no longer be able to loan out guns – with only a narrow exception for guns that are stored at the range or for youth training. There is a vaguely worded “temporary transfer” provision, but the language is subject to interpretation, not defined in the initiative. Bearing Arms warns[6], “I-594 would make the common practice of trying out another friend’s rifle, pistol, or shotgun, illegal. It would make it illegal for a grandfather to give his daughter a firearm to defend herself and her grandchildren from an abusive ex-husband.” Sanders further questioned, “Why can I give my mother a firearm but cannot sell her or loan her one?”

Currently in Washington, residents can purchase a pistol, rifle, or shotgun from another private party located within the state without going through a background check, provided the seller is not a federally licensed firearms dealer.  These are about the only ways someone can acquire a handgun without having the government become aware of the purchase. I-594 would eliminate all of this. There are only a few limited exceptions provided in the initiative, such as between immediate family members, transferring antique weapons, or temporarily transferring if “necessary to prevent imminent death or great bodily harm to the transferee,” and the latter is very limited. A woman who was afraid of a stalker better pray she fits under that definition, otherwise she could be prosecuted. By the time she purchases a firearm and goes through a background check, it might be too late for her safety.

By requiring background checks for virtually all transfers of firearms, the government will automatically compile a database of every gun owner. The ability to quickly obtain a firearm without going through a background check is disparagingly referred to as the “gun show loophole” by gun control proponents, since private parties can perform this type of transaction at a gun show. However, once government starts tracking these kinds of sales, it has the potential to create a massive database of gun owners, something that could eventually lead to gun confiscation down the road.

The NRA says I-594 is “in reality a universal handgun registration scheme.” Many law-abiding Americans would rather buy a firearm from a private party than risk having their name added to a national database that could later be used to target them and confiscate their guns.

Additionally, the new enforcement will take resources away from law enforcement. Washington Citizens Against Regulatory Excess asks[7], “Do you want sex offenders released from crowded prisons to make room for people convicted of family-firearm transfer violations?” The organization notes that there are currently virtually no prosecutions of convicted felons attempting to purchase firearms – because it’s not a problem. Criminals obtain guns illegally. I-594 is a solution looking for a problem, more evidence it’s not about safety, but gun confiscation.

At almost the same time, Washington’s Second Amendment Foundation came up with I-591[8], the Washington Gun Rights Measure, a pro-gun rights initiative on the ballot. In contrast to the billionaire-backed I-594, it is supported by rank-and-file law enforcement, and is the only initiative endorsed by the Washington Council of Police and Sheriffs, the oldest and largest law-enforcement group in the state. I-591 would prohibit the government from confiscating guns or firearms from citizens without due process, protecting against illegal search and seizure, something that happened after Hurricane Katrina. It would also prevent the government from requiring background checks, in order to prevent creation of a universal gun registry – unless a uniform national standard is required.

Sadly, some myths are being perpetuated that I-591 is a softer version of I-594, and would result in more background checks, or ironically even the opposite, weaken existing ones regarding background checks. This is not accurate; the language merely says it would not conflict with federal law.

Criminals are going to commit crimes, even if they have to obtain guns illegally or use other dangerous instruments such as knives and bombs. Putting more restrictions on law-abiding Americans doesn’t work. Disarming innocent people will lead to more victims, not fewer crimes. Not to mention the extra costs to taxpayers of processing all the new gun background checks and compliance enforcement.

What if both initiatives both pass? Since they both negate each other, it is unclear which one would take precedence. Hopefully an activist gun-control judge would not inject his or her own opinion into a decision, should this happen.

The vote is on November 4th. For awhile, polls showed I-594 passing by a significant margin, and I-591 trailing by almost as large a margin. It didn’t help having liberal Republicans like King County Prosecutor Dan Satterberg and former Republican governor Dan Evans support the measure.

The powerful NRA started running TV ads[9] last week, featuring Seattle native and sharpshooter Anette Wachter. Coincidentally, support for I-594 began dropping at the same time, according to the most recent poll by Elway, a left-leaning[10] polling company. The Seattle Post-Intelligencer[11] reported, “During more than 20 years of surveys, Elway has found that support for initiatives tends to decline as voters become aware of details…” Due to Elway’s bias against conservatives in previous polls, which has been reported to be about six to 10 percent, the real numbers are probably closer to 50/50. I-591 also decreased in support at the same time, from a high of 55 percent in April to 39 percent – which, taking Elway’s bias into consideration, puts it also closer to 50/50.

If I-594 passes, it could result in massive numbers of gun owners breaking the law, as we’ve seen before[12] in other states like Connecticut[13] and New York that passed draconian gun control laws earlier this year. Some gun owners in Washington have already said[14] they will not comply.

Gun-control zealots are well aware that gun rights are the last bastion of conservatism in Washington state, and so have cleverly figured out the only way to defeat them is through stealth. Since a majority of gun owners there bewilderingly support the initiative, it is not looking good for the Second Amendment in the state named after our first president, who said in his first State of the Union speech to Congress, “A free people ought not only to be armed, but disciplined.”