Mitch McConnell has been a disaster as the GOP’s “leader” in the Senate and he’s extremely unpopular in Kentucky. In a sane world, some of the heavy hitters in the Republican Party would pull him aside and tell him that he needs to retire instead of risking a crucial seat in deep red Kentucky, but sadly we’re not that lucky. 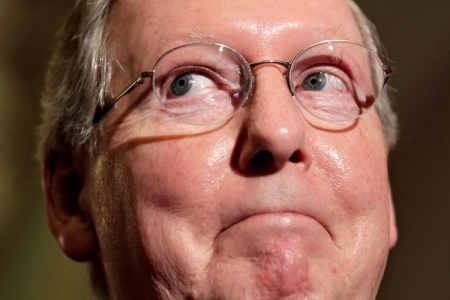 Instead, conservatives have to hope that Matt Bevin[2] can defeat the GOP Establishment in Kentucky and the deep pocketed Todd Akin….ehr, Mitch McConnell in what’s sure to be a bruising primary, so he can attempt to save a seat that should be a gimmie.

Happily, that task got a little easier because Tea Party Nation has yanked its early endorsement of Mitch McConnell[3] because of his scandalous behind the scenes comments.

Yesterday, Glenn Beck dropped not quite a bombshell but something hugely revealing. For the previous couple of days, he had been promising to release the name of a Republican Senator. This Senator was at the now infamous meeting that has been leaked to the liberal media, where many of the GOP Establishment RINOs like New Hampshire Senator Kelly Ayotte, trashed Texas Senator Ted Cruz and Utah Senator Mike Lee for standing up for what they ran on.

This Senator said words to the effect that anyone who supports Freedomworks and the Senate Conservative Fund is a traitor to the Republican Party. Beck made it clear that the word traitor was not used but it was certainly insinuated. According to Beck the meaning was clear.

Beck’s source was another Senator who was in the room at the time and as Beck put it, he’s not on our side. But this person was disgusted by what they heard.

Who is the Senator who thinks that anyone who supports Freedomworks, The Senate Conservative fund and presumably the Tea Party is a traitor?

It is Mitch McConnell.

What does this mean if Mitch McConnell believes grassroots conservatives are the enemy?

A couple of months back, two Tea Party groups endorsed Mitch McConnell for reelection. One was our good friends over at TheTeaParty.Net and the other was Tea Party Nation.

At Tea Party Nation, our logic was very simple.

Harry Reid and the Democrat majority in the Senate must be defeated. If Mitch McConnell is reelected (which is the most likely outcome), the Republicans would need to pick up at least six seats in order to get control of the Senate. They might need even more if one of the RINOs like John McCain switches parties as he threatened to do in 2002.

While endorsing Mitch McConnell seemed like the right thing to do at the time, Mitch McConnell has proven he is not worthy of conservative support. Glenn Beck is right. It is time to defund the GOP until the GOP pushes people like Mitch McConnell out of leadership.

And if they do not, there are always alternatives for conservatives.

While the odds still favor Mitch McConnell being reelected to another term in the Senate, he will do so without our support.

Given his behavior, there is simply no reason for conservatives to support McConnell. Regrettably there are no good choices in Kentucky in this election.

While I’m not sure I agree with Tea Party Nation’s assessment of McConnell’s odds of being reelected if he wins his primary (Given the quality of his opponent, McConnell’s unpopularity, and the money Democrats will pour into the race, I think it’s closer to a toss-up), I am glad to see that it’s withdrawn its endorsement. In all fairness to Tea Party Nation, I don’t think it’s ever viewed McConnell as a particularly Tea Party-friendly candidate; it just realized the importance of retaining that seat. But it’s hard to keep the hand of friendship extended to a Republican who’s trashing grassroots conservative groups like Freedomworks and the Senate Conservatives Fund behind the scenes.