VIDEO: Obama is Stunned When He is Called-Out by Reporter: ‘It is a Fact that Your Party Rejected You’

Obama didn’t miss a beat yesterday in his lying ways. I take that back… he was forthright at least on doubling down on Amnesty. He will shove it through and damn the consequences — which just may be impeachment. The election Tuesday roundly repudiated Obama and his policies. His own party couldn’t get away from Obama fast enough – he generally has the political plague[1]. 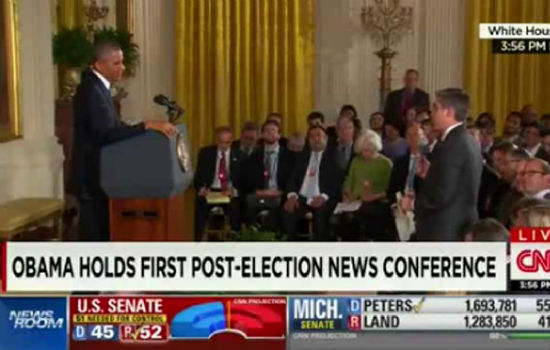 However, during the same speech where he promised collaborative efforts, Obama promised to act unilaterally.

“Before the end of the year, we’re going to take whatever lawful actions that I can take,” he warned. On the issue of immigration, Obama claimed that he would do “what we can do lawfully through executive actions,” but in a manner sounding more like extortion than legitimate political leadership, Obama offered, “You send me a bill that I can sign, and those executive actions go away.”

The press conference continued on as reporters questioned Obama’s intention to rule unilaterally. However, a tense moment arose when CNN’s Jim Acosta pushed the President on the Democrats’ apparent rejection of the president and accused the President of being a “lame duck.”

“I know you don’t want to read the tea leaves, but it is a fact that your party rejected you in these mid-terms. By and large, they did not want you out on the campaign trail in these key battleground states. How do you account for that?… What do you make of the notion that you’re now a lame duck?”

President Obama offered a canned response that promised he would do everything he could to “help make this world a better place over these last two years.”

Obama’s grip on the Senate has slipped and though he spoke of cooperation, also promised unilateral action on issues he feels are important. For years, the Democrats have maintained that the GOP is the party of obstruction, but with hundreds of bills ready to be brought to the floor of the Senate, it has seemed that Democrat Senate Majority Leader Harry Reid has served as the true obstructionist and as Republicans in the House and Senate pass bills, it will be up to the President to sign them or otherwise explain why he will obstruct the legislative process.

I noticed in Obama’s speech that he spoke of hearing the 1/3 of Americans who voted against his policies. He then went on to say he also heard the 2/3’s who didn’t vote. In other words, he did not consider this a legitimate election. How very despotic. His meaningless overtures towards cooperation mean nothing as they are lies as well. Obama will do everything he can to keep Congress toothless and impotent — he will go balls to the walls to finish his destructive agenda before he is ejected from office. What remains to be seen is if the Republicans will actually do anything this time around. I’m not holding my breath.