Wiping the Slate — The Rise of the Tea Party 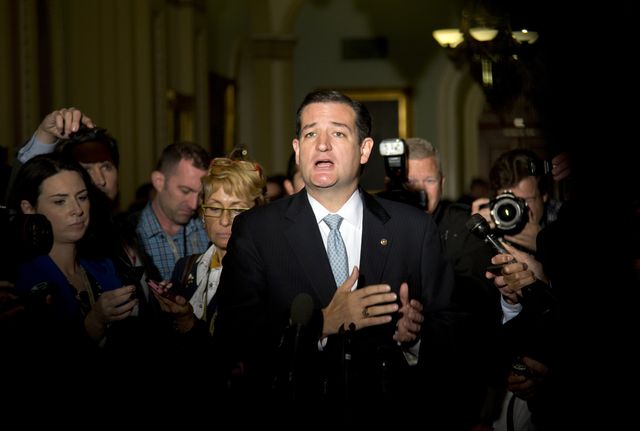 By the time 2016 rolls around, after Obamacare truly burrows into America’s vital organs, Ted Cruz and Mike Lee will be the ones everyone remembers. Cruz will lead the charge to guide America out of Obama’s hellish Marxist wilderness with a coalition in tow and the Tea Party taking point. It is the fight of our lifetime and Americans are readying themselves.

The young guns of the Conservative movement are lining up and much to the chagrin of the Left who keep claiming that Cruz is poison and is destroying the Republicans, it is quite the opposite. Taking a principled stand and reminiscent of Ronald Reagan’s fortitude, Cruz brings us back to the Constitutional tenants the country was based on. He also brings back morality, ethics, courage and the American spirit that has always served us during times of strife and war. Candidates across the nation are lining up[2] to follow in his footsteps and lead the way in the fight against Progressivism:

The competition to be the next Ted Cruz is extremely hot within the Republican Party, where a number of emerging challengers are hoping to capitalize on the newest brand name in conservative politics.

In Kansas, Milton R. Wolf opened his fundraising pitch to supporters last week by asking them whether he could be the next Cruz candidate. In Mississippi, Chris McDaniel announced his campaign to unseat Sen. Thad Cochran last week and welcomed the comparison to Mr. Cruz, calling it “a compliment.”

Then there’s Ben Sasse, a university president running for Nebraska’s U.S. Senate seat, who set state fundraising records by opposing Obamacare. He told the Lincoln Journal Star last week that he would have voted with Mr. Cruz to keep the government shut down last week, saying it was a better option than continuing to spend and run up debt.

America has had enough of the establishment elite on both sides of the aisle. Far from being extreme, the Tea Party is now mainstream… It is what America needs and wants and instead of dumping tea, we are dumping Obamacare and Marxist regulations and policies. Time to gut big government, cut spending and taxes and bring back independence to the shining city on the hill. The Progressives on the Right should be forewarned — the Republicans who have willingly and gleefully crawled into bed with the Marxists for their own gain are about to get their comeuppance. You guys have made the top of the naughty list and the Tea Party is getting ready to kick you to the curb. Damned liars all. Your wealth and perceived power will not prevail this time, because you are evil and you have embraced elitism over Americanism. Witness the rise of Ted Cruz and the Tea Party[3]:

Mr. Cruz came from behind in polls to win the Republican nomination for Senate over a wealthy, establishment-backed candidate, then easily won the general election in 2012.

While attacked by most Democrats, many pundits and even some Republican leaders, Mr. Cruz is in the mainstream for rank-and-file Republican voters, according to Democracy Corps, a Democratic company run by James Carville and Stan Greenberg.

Polling at the height of the shutdown, Democracy Corps found that Mr. Cruz is wildly popular among tea party adherents and, while not necessarily well-known among evangelical Republicans, is popular among those who can identify him.

“Even as pundits label Cruz as ‘fringe,’ it is critical to remember that this is only true when talking about the national electorate,” the pollsters said. “In his own party, there is nothing ‘fringe’ about Ted Cruz. He is right at the center.”

Many of the groups that allied with Mr. Cruz in pushing to defund Obamacare now are backing candidates who seek to join him as reinforcements.

While the Left moans, gnashes their teeth, tears out their hair and screams that the Tea Party is extreme and points out that it will destroy the Republicans, as usual, they are lying. It’s long past time for a coup within the Republican Party. Wipe the slate clean and bask in the rise of the Tea Party. Progressives be afraid, very afraid… we are coming.