What exactly do Indians have against the Dakota Access Pipeline? Are they still fighting the lost 19th century struggle against encroachment by the white man and his ways? Maybe more tangible considerations are involved:

Standing Rock Sioux voted unanimously April 5 to accept two $150,000 donations from ConEdison Development and Fagen Inc., both of which have partnered up to build windmills in the North Dakota area, according to internal documents kept by the tribe.

ConEdison Development acquired land near Standing Rock’s reservation and began construction on a wind power facility last year. Fagen was a contractor on the project.

The reason companies are able to make a profit from infamously inefficient wind turbines is that they are heavily subsidized for ideological reasons. So you the taxpayer may have indirectly contributed to this generosity bestowed upon the Standing Rock Sioux.

Both donations came within days of Standing Rock’s initial decision to protest the multi-billion dollar pipeline, which is expected to bring 470,000 barrels of Bakken crude oil per day from western North Dakota to southern Illinois. …

Are Indian sensitivities getting ignored? Hardly.

The Army Corps of Engineers moved to delay the nearly 1,200 mile-long project again despite having reviewed more than 1,200 pages of environmental and cultural analysis over the past three years, as well as consulting with 55 American Indian tribes nearly 400 times.

Imagine if it were the other way around: an unruly mob uses violent protests to prevent the construction of wind turbines, and then we learn it has been receiving large “donations” from fossil fuel companies. The media would be all over it. 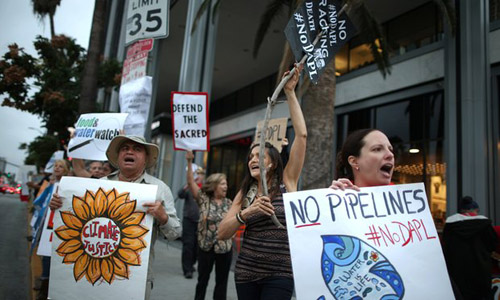 On a tip from Rob E. Cross-posted at Moonbattery.