This is the best story ever[1]! It’s got to be fate that Joey DiJulio received a bachelor party invitation by mistake… a party for Jeff Minetti, who just happens to look a great deal like Joey. Joey follows the emails and then sends a wonderful message congratulating Jeff. Jeff then overnights a wedding invitation to Joey. Joey uses GoFundMe to raise funds to go to the wedding and raises enough to pay for Jeff’s honeymoon to Italy as well. An act of kindness, leads to a lifelong friendship. 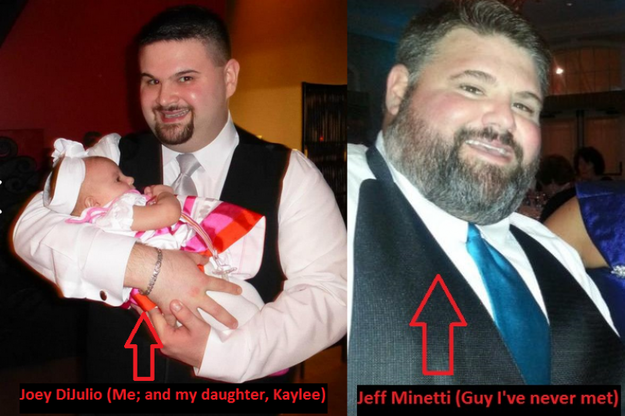 Most of the time when you check your email, you can expect to see things like messages from your co-workers or upcoming bill reminders.

However, in rare occasions you may receive an invitation to a complete stranger’s bachelor party.

That’s what happened for 31-year-old Joey DiJulio of Washington.

When DiJulio checked his email on February 11th, this message was waiting for him:

Has anyone else noticed now that Jeff has been rocking the beard for a while – he looks like a middle aged Pavarotti? At times, he also has ventured into a bit of hipster phase. In addition to publicly questioning his fashion choices, his bachelor party will be a good time for us to celebrate him leading up to his wedding.

While most people could have just have just written it off as a typo, DiJulio was curious to know more. He decided to stay in the shadows for a bit and see what kind of bachelor party they were planning.

After enjoying reading the emails about the party, DiJulio responded. This is what he wrote back:

So, I have no idea who any of you guys are, but I have been enjoying being a fly on the wall hearing about the plans for this bachelor party over the last few months.

I’m assuming my E-Mail address was added to the list by mistake (perhaps a typo of someone else?).

I live out in Seattle, WA and although for a moment I thought it might be funny to just show up and be that guy nobody knows but everyone wonders “who is that guy?”, buying a plane ticket for a cross-country flight just to crash a bachelor’s party might be a bit over the top (although it would be epic!).

Nonetheless, I do hope you guys have a great time and I’d like to take a moment to wish the best of luck in life to the groom!

Even cooler, the groom, Minetti ended up responding to DiJulio, and then sent a wedding invite to him. He even joked about making him the best man should he show up. Message via Buzzfeed[2]:

I’m overnighting you a wedding invite. You show up at the bachelor party and ill make you my best man.

You can give the toast even

Then, DiJulio set up a Gofundme[3] account to pay for his trip to the wedding. It wasn’t hard for him to raise the necessary money.

Not only will DiJulio show up, what’s more remarkable is that the fund went over his goal. Now, he is using the fund to help pay for Minetti’s honeymoon trip to Italy.

So, was this a case of mistaken identity? Or was it a chance encounter of finding a guy in the right place at the right time?

No matter how you cut it, this goes to show that small acts of kindness shown to strangers can pay off with big rewards; not just in terms of free honeymoons to Italy, but lifelong friendships.

How wonderful these events turned out to be. A small mistake led to this. It was something that was meant to be. I want to wish Jeff and his bride the most blessed of weddings and honeymoons. Joey, you and your wife and family are blessed as well. Perhaps Jeff will indeed make Joey his best man and allow him to toast Jeff and his new bride. It’s a story to tell to your children and grandchildren for a lifetime. Simply inspirational.