A&E Has Caved In: Phil Robertson’s “Indefinite Suspension” Is Over.

A&E execs had a choice between making liberals mad or losing their $400 million dollar show. They made the smart choice[1]. 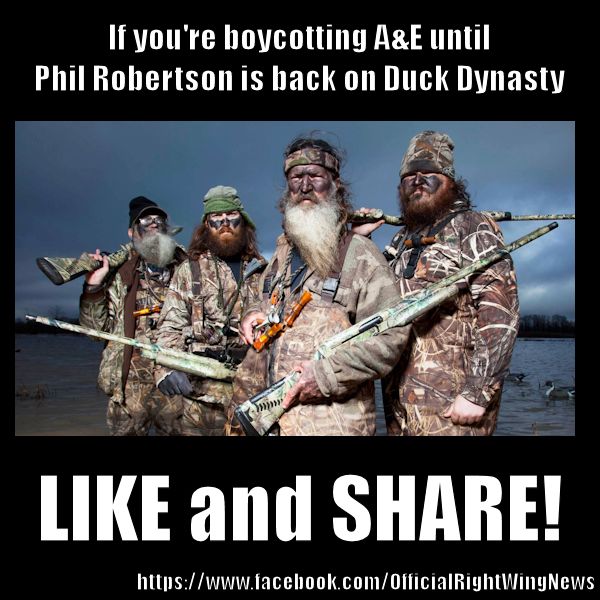 As a global media content company, A+E Networks’ core values are centered around creativity, inclusion and mutual respect. We believe it is a privilege for our brands to be invited into people’s homes and we operate with a strong sense of integrity and deep commitment to these principles.

That is why we reacted so quickly and strongly to a recent interview with Phil Robertson. While Phil’s comments made in the interview reflect his personal views based on his own beliefs, and his own personal journey, he and his family have publicly stated they regret the “coarse language” he used and the mis-interpretation of his core beliefs based only on the article. He also made it clear he would “never incite or encourage hate.” We at A+E Networks expressed our disappointment with his statements in the article, and reiterate that they are not views we hold.

But Duck Dynasty is not a show about one man’s views. It resonates with a large audience because it is a show about family… a family that America has come to love. As you might have seen in many episodes, they come together to reflect and pray for unity, tolerance and forgiveness. These are three values that we at A+E Networks also feel strongly about.

We will also use this moment to launch a national public service campaign (PSA) promoting unity, tolerance and acceptance among all people, a message that supports our core values as a company, and the values found in Duck Dynasty. These PSAs will air across our entire portfolio.

A&E execs can say what they want and air whatever PSA’s they want, but they ran headlong into an unstoppable force called Phil Robertson and he ran right over them. Make no mistake about it, GLAAD, liberalism and political correctness lost while the Robertsons and Christianity won this fight.

In other words, the good guys won and the bad guys lost.