I think this is all in good fun. Gaston is a handsome guy and you just know[1] some other testosterone laden young fellow is going to want to best him. Evidently Gaston has the brawn to match his beauty though and beats the guy at push-ups. And please do not go into a feminist hissy about the prize being a girl. What girl wouldn’t be flattered by that? It’s good, clean fun and it is Disney as the way it should be. Handsome men act out their roles and beautiful girls get their guy… it’s a classic storybook setting. Even villains have their day. 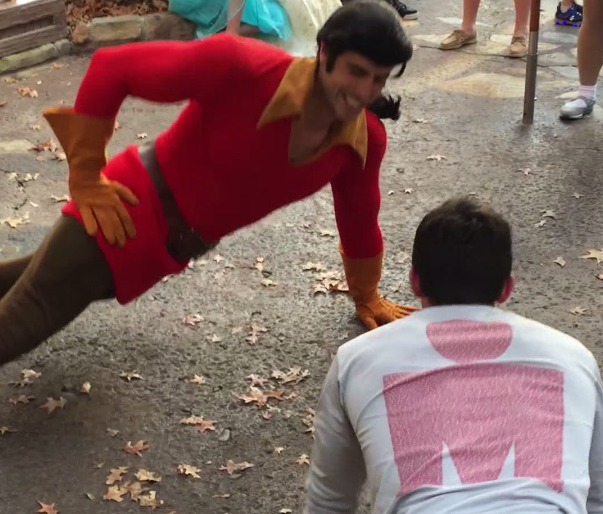 This rather pompous gent traveled to Disney World and challenged Gaston from Beauty and the Beast to a push-up contest.

So you think you’re gonna come into a man’s house and disrespect him by challenging him to a feat of strength? You had better guarantee a victory or else you’ll look like a huge douchewad.

Doesn’t this sucker know that every guy here’d love to be Gaston? Does this hardo even realize that there’s no man in town as admired as Gaston?

There’s no one’s slick as Gaston.

No one’s quick as Gaston.

No one’s neck’s as incredibly thick as Gaston’s.

For there’s no man in town half as manly.

For there’s no one as burly and brawny

As you see, Gaston has got biceps to spare

Not a bit of him’s scraggly or scrawny.

Hey dummy, you should have challenged Prince Charming to a push-up contest. He’s a prince and has never hit the gym in his privileged life.

If you are going to challenge a handsome bad guy in public, be sure you can win. Gaston is right in character and willing to play for his audience. Disney made a great choice in hiring him. He’s even got the arrogant ego thing down pat. Beating boys at push-ups in public pales in comparison to Gaston being ripped by a little girl over Beauty and the Beast though – that happened in November. The young princess did not have much patience with a villain who accosted her favorite character. Villains… you’ve been warned.